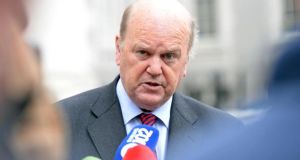 Minister for Finance Michael Noonan: the Government has signalled plans for an expansionary budget of €1.2 billion to €1.5 billion. Photograph: Eric Luke/The Irish Times

There is no scope for reducing the tax take in next October’s budget given the pressures on expenditure, the Nevin Economic Research Institute (Neri) has warned.

In its latest quarterly outlook, the union-backed think tank argues the limited “fiscal space” available to the Government will be needed to absorb demographic pressures on the public spending and the new public pay deal.

The Government has signalled plans for an expansionary budget of €1.2 billion to €1.5 billion, a move that is expected to cut the budget deficit to 1.7 per cent next year.

The institute said while the Government’s adjustment did not strictly meet European Union fiscal rules, it would improve the State’s budget deficit and therefore was “sufficiently prudent”.

Neri economist Tom McDonnell said it would be wrong to say the adjustment was “in any way reckless” as the State was still improving its structural balance . Nonetheless, he said the room for manoeuvre was likely to remain tight for at least three years.

The institute predicted the economy would expand 3.7 per cent this year, which is roughly in line with other forecasts, before declining marginally to 3.5 per cent next year.

It predicted unemployment would continue to decrease, hitting an average of 8.9 per cent next year. By mid-2016 the number of unemployed people in the State will have fallen below 200,000, having climbed above 400,000 at the height of the crash, it said.

In its report, the institute proposes an alternative €1.2 billion adjustment package to that proposed by the Government in its spring statement.

It also includes an additional €1 billion in spending on research and development.

“Given the extremely low levels of public capital investment and government spending on R&D, combined with the scale of the potential benefits to economic growth, it appropriate these areas should receive large allocations of available resources,” it said.

It said it would bring the overall adjustment down to €1.2 billion by reforming various tax expenditures, introducing a new net wealth tax on incomes above €1 million and by beefing up anti-fraud measures.