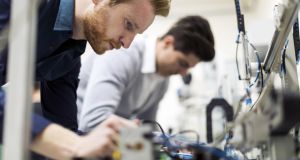 Michael Noonan said fostering innovation would be critical to Ireland’s new economic model and the KDB was designed to incentivise this.

Companies investing in research and development will be able to avail of a new 6.25 per cent corporation tax rate under a new “knowledge development box” (KDB) announced in the budget.

Minister for Finance Michael Noonan said the KDB will be the first such measure in the world that is compliant with the new recommendations of the Organisation for Economic Co-operation and Development.

“This puts Ireland in a unique position to offer long-term certainty to innovative industries planning their research and development investments,” he said.

However, figures released by his department show it expects the measure to cost only €50 million in a full year.

Mr Noonan said fostering innovation would be critical to Ireland’s new economic model and the KDB was designed to incentivise this.

The KDB adds a further dimension to our ‘best in class’ competitive corporation tax offering, which includes the 12.5 per cent headline rate; the R&D tax credit; and the intangible asset regime, Mr Noonan said.

Joe Bollard, tax partner with EY, said the report on redrafting the global tax regime released recently by the OECD as part of its Base Erosion and Profit-Shifting (Beps) programme, had changed what Ireland had been intending to do with its knowledge box.

New recommendations as part of Beps are behind a move from the ownership of an IP asset, to the expenditure of money on research. Activity in relation to scientific and technical work, as against brand development, is also being targeted under the new regimes.

The new Irish knowledge box, he said, is not likely in itself to “turn the dial” in relation to attracting new talent to Ireland so that companies can avail of the lower tax rate. He said Ireland’s relatively high income tax rate was an issue in this regard.