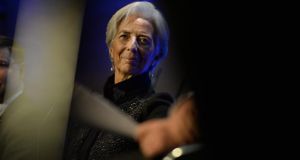 Only days before the ECB’s governors gather in Frankfurt to decide on a scheme to buy up sovereign bonds, Mr Noonan has said he fears the effort will be ineffective.

Talks within the ECB centre on a plan for the national central banks of euro zone countries to remain on the hook for any losses incurred on the bonds acquired by the ECB.

This is known formally as quantitive easing, a policy deployed with success in the US and Britain but heavily contested in Germany in light of concerns that it would amount to printing money.

While the objective is to avert a deflationary spiral in the single currency area and spur economic growth, Mr Noonan told an International Monetary Fund conference in Dublin Castle that the initiative might not go far enough.

“I believe that, if it becomes the function of national central banks rather than primarily of Frankfurt, then I think it will be ineffective,” Mr Noonan said.

“If it’s the function of national central banks I don’t think there’d be a mutualisation of risk. As well as that, I think it would give a signal in terms of banking policy that there’s a reversal of approach.

Mr Noonan’s remarks received a cold response from ECB executive board member Benoît Cœuré, who was sitting beside him in the same panel.

But the Minister’s observations chimed with earlier comments by IMF managing director Christine Lagarde, who was in Dublin for the conference on Ireland’s bailout. “The more efficient it is, the more mutualisation, the better,” she said after talks in Government Buildings.

Mr Cœuré said he was not at liberty to discuss ECB monetary policy as the bank’s governors are in a quiet period before meeting on Thursday. However, he said it was not the ECB’s job to bring forward the pooling of sovereign risk.

While Ms Lagarde said the success of Ireland’s bailout was a tribute both to the Irish people and their political representatives , she said moving towards a balanced budget “over time” would put Ireland’s high debt on a sustainable path.

She recognised deficiencies in the rescue programme. One was that bank recapitalisation was not on its own sufficient without strong independent bank supervision.

Amid renewed criticism of the ECB’s refusal to allow the Irish authorities impose losses on senior bank bondholders, Ms Lagarde said there had been a “learning curve” from what had happened in Ireland.