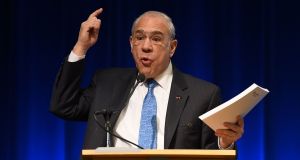 Angel Gurria, secretary general of the Organization for Economic Co-operation and Development (OECD): the OECD’s report suggests global FDI increased by 25 per cent to $1.7 trillion in 2015. Photograph: Molly Riley/AFP/Getty Images

Foreign direct investment (FDI) among top industrial countries almost doubled last year with large inflows recorded in Ireland, the Netherlands, Switzerland and the US. Investors from these countries were also responsible for the 35 per cent increase in OECD outflows.

However, a new OECD report suggests a significant portion of the increase was down to financial and corporate restructuring rather than new investments.

Specifically, it highlighted several so-called tax inversion deals, which it said, were designed to reduce tax obligations in the US.

Tax inversion deals allow a company to shift profits to the lowest tax jurisdiction in a merger. They are usually structured in a way to make the smaller entity look like the bigger takeover party.

The OECD’s report suggests global FDI increased by 25 per cent to $1.7 trillion in 2015, reaching its highest level since the financial crisis of 2007. These countries were among the top destinations and sources of FDI worldwide in 2015.