Latest Quarterly National Accounts show the economy expanded by 7.7 per cent in GDP terms in the year to the end of June.

Pictured after today’s publication, Minister for Finance Michael Noonan said the turnaround “is a direct consequence of the policies pursued by this Government” . Photograph: Eric Luke / The Irish Times

Ireland’s economy is now growing at its fastest rate in seven years, according to the latest Quarterly National Accounts.

The figures, published this morning by the Central Statistics Office, show the economy expanded by 7.7 per cent in GDP terms in the year to the end of June.

This is the strongest rate of annualised growth recorded in the economy since early 2007.

The accounts show GDP - the standard measure of economic growth -expanded by 1.5 per cent in the second quarter.

Gross National Product (GNP), which strips out the effects of multinational profit flows, rose by 0.5 per cent over the same period.

The strong growth numbers prompted the Government to upgrade its growth forecast for the year for the second time in a week.

“Last week, we were looking at the soft data. We haven’t the numbers run yet but it will settle around 4.5 per cent this year. It’s somewhere around there and a bit less for next year,” Minister for Finance Michael Noonan. 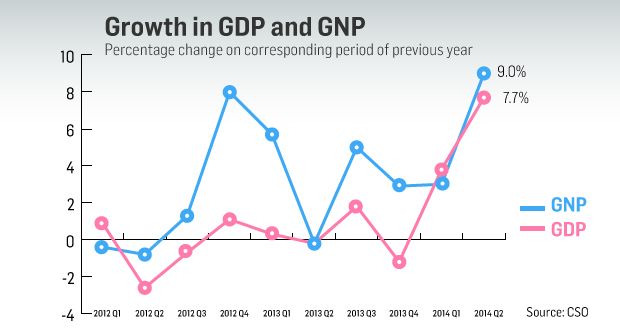 The better-than-expected figures, combined with strong exchequer numbers, should further ease pressure on the Government to find new budget cuts for next year.

“The turnaround that we are seeing in the Irish economy is a direct consequence of the policies pursued by this Government and the sacrifices made by the Irish people,” Mr Noonan said.

“Consolidation of close to 20 per cent of GDP has been introduced along with major structural reforms designed to boost the competitiveness of the Irish economy,” he said.

Despite the better-than-expected figures, Mr Noonan said he did not think there was a “clamour for a giveaway budget”.

He said the Government was aiming to get unemployed people back to work and attract young graduates who had emigrated back to Ireland. “The budget will be designed with those objectives in mind.”

He said the Government wanted to “get away from the boom and bust model”.

A consolidation of €2 billion would still have to be implemented, he said, but that would not have to be done through extra cutbacks.

Employers’ group Ibec, however, said the strong growth numbers reinforced the scope for tax cuts in the upcoming budget.

Ibec Head of Policy and Chief Economist Fergal O’Brien said: “The Q2 numbers are stronger than most expected. With GDP up 7.7 per cent on last year, there is real evidence that our great recession can be consigned to the history books.

“The strength of the recovery is now such that Government does not need any additional austerity measures to fix the public finances. It needs to keep a steady hand on expenditure, but has the capacity to cut taxes on budget day.”

Conall Mac Coille, chief economist at Davy Stockbrokers, said: “The GDP data is finally reflecting the evidence from the surveys and the PMIs that the economy is recovering really rapidly.”

“Every part of the economy - the export sector, construction, consumer spending - it’s all picking up together and that’s giving you these really strong growth rates,” he said.

Mr Mac Coille said GDP growth of at least 4 per cent was likely for the year as a whole and that if GDP was flat for the second half of the year, 5 per cent growth would not be out of the question.

Euro 2020: Why has Dublin lost hosting rights? What happens if I have tickets?

Your tax bill is set to rise: what is likely to change?

Ryanair claims it had to fly empty jet from Paris because of quarantine rules 17:58
Council recommends refusal for Charlie Chawke’s €186m apartment scheme 17:29
How to . . .find out if your account has been leaked online 16:55
Kerry Co-op Creameries wants return to arbitration over milk price issue 16:35
Publicans in FBD case covered for partial closure, court rules 16:35

4 Ken Fennell: ‘There is a growing feeling that there could be a lot of companies in trouble’

9 How to . . .find out if your account has been leaked online

Inside Business with Ciaran Hancock - Super League shambles and the future of European football 43:11