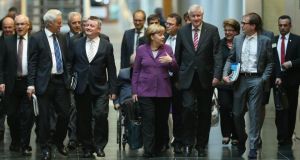 Ireland’s corporate tax regime and the Government’s claim for further bank aid from Europe has been sucked into talks on the formation of the next German government.

In discussions with German chancellor Angela Merkel, the opposition Social Democratic party has set its face against using the ESM permanent bailout fund to provide capital directly to Irish banks.

The SPD is further reported to be seeking “far-reaching commitments from Dublin” on tax issues in return for any emergency loan facility from the ESM, a kind of overdraft to be used if investor confidence is suddenly lost.

While Dr Merkel is already reluctant to deploy the ESM for direct bank recapitalisations in Ireland or any other country, it is argued in German official circles that the SPD is even more strongly resistant to the notion.

‘Binding precondition’
Having won last month’s election, the chancellor’s Christian Democratic party is now in coalition talks with the second-placed SPD because she lacks a parliamentary majority. The protection of taxpayers from costly bank bailouts is being described as a “binding precondition” for the SPD in these talks.

As the negotiation continues, the Süddeutsche Zeitung reported yesterday that the SPD sees no circumstances in which it would support direct ESM aid to Ireland’s banks.

SPD finance spokesman Carsten Schneider was quoted saying such a programme would be possible only if Dublin granted two concessions on business taxation.

Tax plans
Ireland would be obliged first to drop its opposition to a stalled European plan to tax financial transactions.

Ireland would also be obliged to increase the 12.5 per cent corporate tax rate, something the Coalition has vowed not to do. There was no comment last evening from the spokesman for the Government, which expects a smooth exit from the EU/IMF bailout in December.

In German official circles right now, the clear sense remains that Ireland is not a cause for any concern and that the likely return to private bond markets demonstrates that the State has no need for any more debt relief.

An Irish source said the Government would never comment on reports on coalition talks in any other country. It is understood, however, that the Government sees no erosion of Dr Merkel’s pledge one year ago to treat Ireland’s banking problem as a “special case”.