Call for Ireland to be centrally involved in any exit discussions 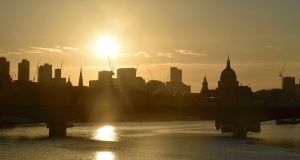 Dawn breaks over the City of London

The Irish business community has reacted with disappointment to the new that Britain has voted to leave the European Union.

Lobby group Ibec said the UK vote is a “very significant blow the EU, which will lead to a potentially protracted and unwelcome period of uncertainty and instability in Europe.”

Ibec chief executive Danny McCoy said the Irish Government, EU institutions and central banks must do all within their power to minimise instability. He called for Ireland to be involved in any negotiations regarding Britain’s exit .

“Ireland will be impacted more than other countries by the UK’s decision to leave. It is vital we play a central role in exit negotiations. Our unique economic concerns need to be heard and fully understood, and our interests fully safeguarded in any final agreement,” he said.

Mr McCoy predicted that while Brexit is undoubtedly a negative event for the Irish economy, Ireland would remain one of the EU’s strongest growing economies over the coming years.

Dublin Chamber also called on the Government to ensure that business interests are protected in the negotiations on an exit.

“The outcome of the vote is disappointing and presents a major challenge for Irish business, particularly given that the UK is one of Ireland’s most important trading partners,” said chief executive Gina Quin.

“The focus of everyone in Ireland must be on ensuring that the Irish voice is heard loud and clear in the negotiations which will now take place. We must ensure that our trade with the UK and the movement of talent and tourists between our two islands remains on a stable footing,” she added.

The Irish Farmers Association emphasised the need for steps to be taken to allay concerns in the agri-food sector about the implications of the vote.

“The Government must give a clear signal that the issues of major importance to this sector, our trading relationship with the UK and Northern Ireland and and the EU budget, will be central to the EU-UK negotiations,” said IFA president Joe Healy.

“Minimising uncertainty and setting out a clear strategy on the next steps is a priority,” he added.

Chambers Ireland said regardless of the result the UK would continue to be a key partner for Ireland in the years ahead.

“A clear framework for a UK exit must be agreed and put in place that minimises disruption and enables businesses to plan for the new reality. The EU also needs to develop a new program of reform to improve the functioning of the Single Market and the competitiveness of European business,” said chief executive Ian Talbot.

Chartered Accountants Ireland said the decision of UK voters to leave the EU sent a clear message to those who remain.

Northern Ireland Chamber of Commerce and Industry said a rapid response from the British government was needed as a Brexit would undoubtedly have an impact on business.

“Northern Ireland is forging out a place in the global economy as well as trading relationships with European neighbours and that work must continue. We are now in a unique position as the only part of the UK with a land border with the EU and that will throw up challenges in terms of new trading arrangements,” said chief executive Ann McGregor.

“There may well be a degree of uncertainty and disruption in the months ahead, especially around certain trade issues. Government must therefore respond rapidly to avoid any uncertainty for business and potential damage to trade and inward investment,” she added.

The British Irish Chamber of Commerce said it would be working to assist businesses as they deal with the consequences of the referendum result.

“The chamber will constructively support early steps to bring certainty to the outlook facing employers. (It) looks forward to the UK Government quickly determining its requirements as it negotiates its exit from the EU,” said director general John McGrane.