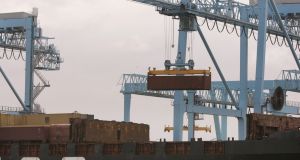 Weak international demand saw the value of Irish exports fall by 10 per cent in February.

The decline was driven by a 15 per cent (€309 million) fall in exports of medical and pharmaceutical products and an 18 per cent (€286 million) drop in organic chemical exports.

The value of imports also fell in February compared with the same month last year, dropping by 2 per cent (€61 million) to €3.89 billion on the back of a 21 per cent fall-off in the import of petroleum products.

On a monthly basis, the figures for February show a seasonally adjusted increase in exports of 2.2 per cent (154 million) to €7 billion from January, while imports fell by 2 per cent (69 million) to €3.88 billion.

The combined effect resulted in an 8 per cent rise in the economy's seasonally adjusted trade surplus to €3.13 billion.

The figures showed the EU accounted for 58 per cent (€3.85 billion) of total exports in February, while the main non-EU destination was the US which accounted for 22 per cent (€1.49 billion).

Two-thirds of the value of Irish imports in February came from the EU, with one-third coming from Britain, 9 per cent from the US and 6 per cent from China.

"In all, this is a weak start to the year, albeit one that is not unexpected given the trends evident," NCB economist Philip O'Sullivan said.

He noted that of the nine principal export categories, only three - food, beverage and animal/ vegetable oils - recorded an annual improvement.

1 Election 2020: Parties' pledges on housing simply don’t add up
2 Britain after Brexit will not be alone, but it will be lonelier
3 First-time buyers drive growth in mortgage values and volumes
4 Banks withdrawing from ATMs – another failure of regulation
5 Coronavirus shuts down Starbucks, Toyota and BA
6 Marlet snaps up 1.8 acre Sandyford site for €17m
7 Housebuilder Glenveagh to build 2,650 more homes than planned
8 Ryanair accepts four-year labour agreement with Irish pilots
9 Tullow shares rally as African oil veteran’s stake nears 10%
10 Getting out from under ‘never-ending’ Celtic Tiger debt burden
Real news has value SUBSCRIBE