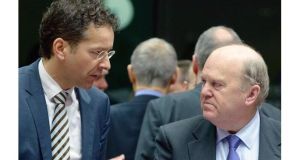 European finance ministers are to urge the EU-IMF troika to come up with a deal to extend the time Ireland has to pay back its bailout loans.

While agreement had been reached in principle to extend the Ireland's maturities, the scope and technical detail of how the extension of maturities will be implemented had yet to be worked out.

After talks in Brussels today, ministers have decided to ask troika officials in charge of the country's bailout programme to consider the best options for adjusting the maturities of the State's multi-billion-euro loans.

In a statement the ministers said spreading out the repayments was needed “to smooth the debt redemption profiles”.

Taoiseach Enda Kenny said the deal would help reduce Ireland’s borrowing requirement and therefore ease its way back into the international money markets.

“It’s good news in the sense of extending the maturity of the loans involved and therefore easing further our way back into the markets, and reducing our borrowing requirement in the medium future,” Mr Kenny said.

The finance chiefs reached the conclusion at a meeting in Brussels today, chaired by Minister for Finance Michael Noonan.

The Ecofin group of European finance ministers said they had agreed in principle to arranging a new debt repayment schedule on some of the bailout loans given to Ireland and Portugal. The countries had asked for an extension to their repayment periods in January.

Ireland and Portugal have called for a reworking of the terms of both parts of the loans.

The finance ministers in Brussels said both programmes are on track and performing well despite “challenging macro-economic circumstances”.

They agreed to ask the troika — the International Monetary Fund, European Commission and European Central Bank — to consider how the terms of the loans can be readjusted.

A final decision is expected during the next big meeting of finance heads next month in Dublin.

“EU finance ministers commended the authorities’ strong commitment to their respective adjustment programmes, which have already been successful in addressing previously accumulated imbalances,” the ministers said.

“Both countries have taken successful steps to re-enter the markets. In both meetings views were exchanged on how best to support their efforts to regain full market access and successfully exit their programmes.”

However, Mr Noonan warned there would be much work ahead before the deal could take effect.

He said there was a willingness across all member states to help Ireland and Portugal, but there were “varying levels of difficulties” in putting it in place.

EU commissioner for economic and monetary affairs Olli Rehn said he expected an arrangement to be concluded by next month’s meeting of finance ministers, which is scheduled to take place in Dublin.

The average maturity of Ireland’s bailout loans now stands at about 12 years, though the earlier tranches of loans issued had a much shorter maturity. Ireland has more than €30 billion of bailout loans falling due before 2020, with significant repayment peaks between 2015 and 2018.

The proposed deal was also backed by Minister for Jobs Richard Bruton earlier this morning.

“If we get an extension of the majority you don’t have to go back to the market and you get a rate on interest that has been fixed and it would be a very good deal for the taxpayer”, he said.

Mr Bruton added “the omens have been good” for Ireland’s return to the market and that the deal would help the country’s financial stability and real economy.

“It was a positive discussion on adjustments for these two countries. The technical shapes and forms are to be developed by the troika,” Mr Rehn said, following the meeting yesterday evening.

1 Coronavirus: New government could face €11bn of austerity
2 HSBC board rethinks overhaul and seeks even deeper cuts
3 Working from home: New costs, new stresses and little relief
4 Joint accounts: if one of us dies, can the other access the money?
5 Investor alleges fraud over collapse in property fund value
6 DAA offers workers up to two years’ wages in redundancy plan
7 Stocktake: History says this is not a bear market rally
8 Airline stocks take off as coronavirus worries ease
9 We are ‘sale agreed’, but can we go back with a lower offer?
10 Fierce debate brews as EU Commission lays out recovery plans
Real news has value SUBSCRIBE