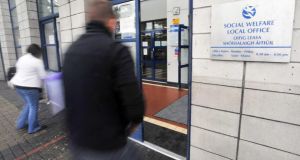 Minister for Social Protection Joan Burton said there were still far too many people out of work, and that tackling unemployment remained the Government’s number one priority, but said the figures demonstrated steady progress.

The rate of employment growth accelerated during the third quarter of 2013, according to the latest figures from the Central Statistics Office.

There was a year-on-year increase in employment of 3.2 per cent, or 58,000, for the third quarter of this year as compared with the same quarter last year, according to the Quarterly National Household Survey results. Total employment rose to 1,899,300.

The household survey figures are the official or definitive labour force estimates for the Irish economy.

The comparable percentage fall for the second quarter was 6.9 per cent. The preceding quarter recorded an even higher year-on-year rate of decline, of 9.3 per cent, but the two quarters prior to that recorded falls of 6.1 per cent and 1.1 per cent, making for a general trend towards accelerating fall-off in unemployment.

Minister for Social Protection Joan Burton said there were still far too many people out of work, and that tackling unemployment remained the Government’s number one priority, but said the figures demonstrated steady progress.

“Especially important is the fact that the majority of people returning to work are returning to full-time employment,” she said.

David McNamara of Davy said the data provides further hard evidence the Irish economy bounced back in the second half of this year. He said he expected the strong rise in employment to drive consumer spending in the second half of this year and into 2014, causing Davy to leave its above-consensus forecasts for gross domestic product growth unchanged at 1 per cent in 2013 and 2.5 per cent in 2014.

SME criticism
Similar positive responses were issued by other observers, though Isme chief executive Mark Fielding said the increase is “needlessly slow” and if the Government would only listen to the owners of small and medium-sized enterprises, more jobs would be created.