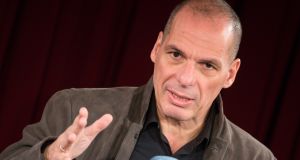 Ireland is a tax haven “free-riding” on the rest of Europe, and remains deeply divided since the crash, former Greek finance minister and author Yanis Varoufakis has claimed.

Speaking at an event in Munich hosted by the Ifo institute for economic research, Mr Varoufakis said the euro zone was unsustainable and would impoverish peripheral countries such as Greece. He said the latest political and economic turbulence in Italy highlighted as much.

Asked if Ireland’s recent economic turnaround did not run counter to his narrative of euro zone disintegration, he said: “Ireland is a divided society. There are two Irelands. There is the real Ireland which remains depressed.

“If you look at those who are not connected to the offshore economy… to the Facebooks and the Apples and so on… the Irish who remain in old Ireland they remain just as badly off as they were 10 years ago,” he said. “And the discontent is massive.

“But of course Ireland is a tax haven, they are piggybacking, free-riding on you, on us by allowing Apple and Facebook to pay 2 per cent tax,” he said, referring to the low-level of corporation tax paid by US multinationals here.

The academic, who rose to prominence during a brief spell as Greek finance minister in 2015, said the 26 per cent growth recorded here in 2015 should have set off alarm bells in Europe.

Mr Varoufakis argued that Germany cannot and should not pay to save the euro zone.

His argument is that debt-laden euro zone states such as Italy have been denied the option of devaluation to maintain international competitiveness, and instead been forced to rely on debt-funded public spending to maintain economic activity and living standards.

In the absence of a favourable exchange rate, Mr Varoufakis said Greece, Spain, Portugal and Ireland faced the difficult task of large internal cost reductions to regain competitiveness. This had resulted in near 40 per cent cut in wages in Greece, he added.

This brutal and not always successful process had resulted in the rise of populism and anti-EU forces across the bloc, Mr Varoufakis said.

The economist suggested it had been a mistake to try and attempt monetary union ahead of fiscal union, and that the euro zone needed to be loosened, potentially with Germany exiting the euro, to allow the periphery escape their high-debt burdens.

On the brewing trade war between the US and Europe, Mr Varoufakis said while US president Donald Trump was ignorant about a lot of things he knew some essential things about trade.

“He knows he cannot lose a trade war against countries that have high trade surpluses with the US like Germany and Italy,” he said, adding that the US president could therefore afford to play hard ball.

1 Only way is up for Stripe as valuation skyrockets
2 Basic income for all: Has the Covid crisis given us a new economic model?
3 ‘I don’t need to do any of this. . .I don’t actually need to work.’
4 Kinzen raises $2.2m as it helps clients fight ‘misinformation’
5 Anti-alcohol zeal of public health experts peppers reopening debate
6 AIB revives €1bn-plus problem mortgages sale
7 Direct sea routes to Europe offer certainty in choppy Brexit waters
8 How to gift your child a house deposit . . . tax free
9 Online shoppers face unwelcome tax surprise
10 Irish designer of Oxford vaccine: ‘I’ve never worked so hard in my life’
Real news has value SUBSCRIBE