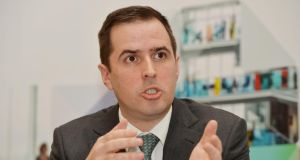 Chief executive Martin Shanahan said the current pipeline of job projects looks “looks reasonably strong for the foreseeable future” as he unveiled the plan, under which IDA Ireland aims to provide 80,000 new jobs by 2019.

Recognising that job losses are “inevitable” in the world of foreign direct investment, the plan aims to minimise losses and deliver a minimum of 35,000 new jobs in the five years. Such growth would represent a 40 per cent increase on the target in the 2010-2014 strategic plan. “This will increase employment in the client portfolio from 174,448 in 2014 to 209,000 by 2019,” the agency said.

IDA Ireland’s objective is to increase the level of investment in each of the Republic’s regions by between 30 per cent and 40 per cent in the next five years.

Construction of such buildings will begin later this year at sites in Sligo, Castlebar and Tralee, with further investments planned for Galway, Dundalk, Limerick, Athlone, Carlow and Waterford.

IDA Ireland sees potential job opportunities in a number of areas: the Internet of Things; Big Data; Security Biometrics; Smart Ageing; Portable Services; Sharing Economy; and Financial Technology. It will also seek to broaden its interests into sectors such as the marine economy, infrastructure-linked investments, property, arts and culture and energy services.

In its plan, IDA Ireland said the continuation of pro-business policies and the maintenance of competitiveness were required for foreign direct investment.

Asked whether political uncertainty over the outcome of the looming election was being raised by investors, Mr Shanahan said there was “no uncertainty” abroad over Ireland’s policy. “It’s not something that features in my discussions in boardrooms across the world.”

Mr Bruton questioned the policies advanced by Sinn Féin, adding that Ireland was at a fork in the road and should be very careful about its approach to tax policy.

“When you have parties like Sinn Féin saying they’ll increase employers’ PRSI; when you have them saying they’re going to have a higher marginal rate of income tax; when you have them on their track record of saying they would raise €5,000 million extra taxes than has been raised by this Government you’re clearly on a tax policy regime that does not protect the competitive base that we’ve had,” Mr Bruton said.

6 Checking in? No thanks. I’m just here to use the wifi