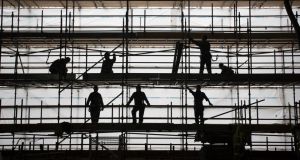 Catching up: experience suggests that the housebuilding sector is a bit like a super-tanker and is slow to turn around in response to market signals and begin to grow. Photograph: Simon Dawson/Bloomberg

One of the costs of the economic crisis was the cloud of pessimism that accompanied it. The Government, many companies and private citizens were so focused on economic survival that little consideration was given to the possibility of an economic afterlife.

After the housing bubble burst, there were bust developers and banks, a collapse in house and site values, empty homes and ghost estates. So building stopped dead and emerging housing needs were ignored.

However, throughout the crisis, the population continued to rise, particularly those aged 30-40, in spite of emigration. At the same time, a depleted older generation – a legacy of heavy emigration in earlier times – meant few homes becoming vacant from deaths. The seeds of an emerging shortage were there.

For the next decade the rising population will require about 25,000 new homes each year.

As recent research from the Economic and Social Research Institute shows, a steady fall in rents from the onset of the crisis gave rise to an increase in the number of separate households. More people lived on their own, with fewer in shared apartments.

Young people moved out of the parental home at a younger age than before. More than 85 per cent of the new households formed between 2006 and 2011 were in the private rented sector.

The result was that the stock of vacant homes in Dublin and other major urban areas rapidly diminished. I remember suggesting to a BBC TV crew in 2009, who wanted an image of the collapsed housing market, that they film the empty apartment block beside my office, but when they arrived there were lights on everywhere, as the block had just been fully let.

The number of homes being built is at the lowest level in at least the last 40 years and, in Dublin, the stock of vacant homes has disappeared. With a return to economic growth and a rising population, there is considerable pressure on the housing market. Rents and prices in the greater Dublin area have being rising since 2012, with a similar trend in other urban areas. While the cost of housing is still far below the boom years and likely to remain so, the upward pressure on prices will continue while few homes are being built.

However, experience suggests that the housebuilding sector is a bit like a super-tanker and is slow to turn around in response to market signals and begin to grow.

The aftermath of the Great Recession has left the housebuilding sector in a poor place. Many developers and builders are no longer in business and many skilled workers have found work abroad.

In the short run, banks that had fallen over themselves to fund investment in the boom, may be either unable or unwilling to fund builders or developers.

An important challenge for policy is to tackle these constraints and free up supply of additional homes. Pumping additional money into a market where supply is fixed or sluggish will only put up prices.

There is little immediate danger of a new bubble, but there are real concerns that a new generation of young people should not take on too much debt.

Unlike 1970-2000, in today’s low-inflation environment, the burden of debt is unlikely to be eroded or eased through inflation.

Just as the number of separate households increased when rents were low, rising rents and prices may reverse that trend. Young people may stay with their parents for longer and apartment sharing may get more popular again. This change in behaviour is a way to cope with a fixed housing stock until such time as supply responds to increased demand.

Rent control is now being canvassed as one answer to the issue of homelessness. With a ready market for homes for sale, fuelled by rising numbers of people in their thirties who want to buy, landlords would find it more profitable to sell out to owner-occupiers if their rents were controlled. That could diminish the supply of properties to rent and aggravate current difficulties.

Moves by banks to repossess buy-to-let homes, which are then sold on to owner-occupiers, could also adversely affect the supply of homes to rent. Rent control would forestall any reversal of the pace of new household formation, exacerbating the supply shortage in the short run.

In the medium term, the solution to a supply shortage is to increase the supply of homes, whether to rent or to buy. Many of those who are renting are likely to buy their own homes in the coming years.

As they move out of rented housing, this should free up some of the current stock of rented housing to meet the needs of new households and those on low incomes who will remain as long-term renters.