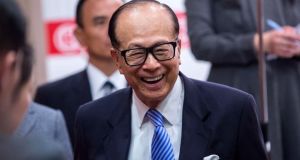 In January, Li transformed his business empire, creating two listed companies focused on property and telecoms. His focus has turned to developed markets such as Europe, and he also shifted the domicile of his flagship Cheung Kong Holdings to the Cayman Islands from Hong Kong, fueling speculation the tycoon was pulling out of the mainland.

He was attacked in the mainland media as unpatriotic and outdated, especially after he sold €1.8 billion worth of property in Shanghai, Nanjing and Beijing.

In response, he issued an unusual three-page statement, supporting President Xi Jinping’s reform programme and rejecting claims he was divesting assets from the mainland and turning his back on the Motherland.

He said his company was growing its retail operations on the mainland.

While the tone was conciliatory and supportive, he crucially also warned against a “Cultural Revolution-style way of thinking”, when Chairman Mao Zedong’s Red Guards shrilly attacked leading figures during a period of ideological frenzy between 1966 and 1976. Clearly the accusations of treachery in the Communist Party-controlled media rankled with Superman.