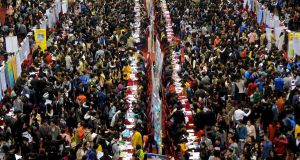 A job fair at Shandong University in China. Slower economic growth in China, worsening producer price deflation and a generally chillier global environment has prompted the Manila-based Asian Development Bank to cut its growth forecasts for developing economies in Asia.

Developing Asia will expand 5.7 per cent this year and in 2017, according to the ADB’s latest Asian Development Outlook, released on Wednesday, down from a December forecast of 6.0 per cent growth. The region, which includes 45 countries in the Asia Pacific, grew 5.9 per cent last year.

“India is growing very strongly. Growth at 7.4 per cent is already very high and India has the potential to grow as fast as China used to grow, but it needs to implement reforms,” said Wei.

Economic growth in China, the world’s second-largest economy, would slow to 6.5 per cent this year from 6.9 per cent in 2015, its weakest expansion in a quarter of a century, and would slow further to 6.3 per cent in 2017.

The bank’s 2016 projection for China is down from a December estimate of 6.7 per cent, is at the lower end of Beijing’s own target of 6.5 to 7 per cent as the government presses ahead with reforms, although China’s premier Li Keqiang has vowed that would not lead to a hard landing.

In 2015, China saw producer prices contract by 5.2 per cent and by February this year had endured 48 consecutive months of producer price deflation.

“Deflation in China may be transmitted to its neighbours through lower export prices, especially if the renminbi depreciates. In fact, producer prices fell in 2015 by 9.1 per cent in Singapore, 6.7 per cent in the Philippines, 4.8 per cent in Malaysia, and by smaller margins in India, the Republic of Korea, Thailand, and Hong Kong, ” he said.

Another potential risk factor was tightening US monetary policy.

“US interest rates are a potential risk factor, and could see capital leaving emerging markets and going to the US. This could be a problem for countries heavily reliant on FDI (foreign direct investment),” said Wei.

“Potential growth depends on both the growth of the labour force and the growth of labour productivity,” Wei said. “While altering demographics is not something that can be accomplished within a few years, many developing economies still have tremendous room to use structural reforms to remove distortions in the labour, capital, and land markets, and to improve incentives for private sector investment, all of which lead to higher productivity and therefore higher potential growth.”

Asia’s average growth declined by 2.0 per cent between 2008 and 2014, the report noted, and about 40 per cent of that drop was due to moderating potential growth. Since economies in Asia and the Pacific account for over a quarter of the world’s gross domestic product, improving the region’s productivity is essential for the world’s rebound as well.