Arthur Beesley gives his verdict on Greece's snap referendum, its position in Europe and how that might change within the coming days.

The Greek community in Ireland respond to the developing crisis in their home country. 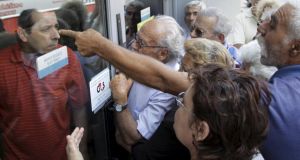 Pensioners waiting outside a closed National Bank branch and hoping to get their pensions, argue with a bank employee in Iraklio in Crete. Photograph: Stefanos Rapanis/Reuters

Diplomatic efforts to persuade Greece to engage with European lenders have intensified ahead of the expected expiration of the Greek bailout on Tuesday, after Greece confirmed it would not meet a €1.6 billion payment due to the IMF.

With Greek banks due to remain closed, concerted efforts were under way to try and re-engage Athens with creditors, with senior EU figures insisting the door was still open for Greece to return to the negotiating table.

France, which has taken a relatively conciliatory stance towards Greece in the latest bailout discussions, is pushing for an agreement to avert a Greek exit from the euro zone, with French president François Hollande speaking by phone to US president Barack Obama.

He reiterated that a No vote in the referendum would strengthen the Greek negotiating position.

Mr Tsipras said he will “respect the outcome” of Sunday’s referendum and act in accordance with the constitution, in a strong suggestion that he will resign if the public vote Yes.

In a live interview with Greece’s public broadcaster ERT, which his government reopened last month, Mr Tsipras also rejected the suggestion, made by a number of European leaders earlier in the day, that a No vote will lead to a Grexit as he said it would prove too costly for the other side.

In Berlin, Chancellor Angela Merkel said she was “not closed” to further talks with Greece but ruled out more debt relief. She warned the Greek government she would not allow Europe to sacrifice its long-term fiscal principles for the short-term goal of keeping Athens in the euro.

“Europe can only work when we’re prepared to compromise: no one can get 100 per cent,” she said. As capital controls were introduced in Greece, protesters took to Syntagma Square in Athens last night.

In one of the biggest rallies seen in the capital, thousands flocked to the square below parliament to demonstrate support for the government, which on Monday ordered banks to close until July 7th after ATMs ran dry.

Under the new capital controls, the daily withdrawal limit for holders of Greek credit and cash cards has been set at €60. However, tourists and holders of foreign bank cards are exempt from these restrictions.

Criticising the “egotism” and “populist gains” he said characterised the Greek approach to the talks.

He added that lenders had made significant concessions and said the Greek leadership had been informed “debt measures” would be considered in the autumn, stressing the “door was open” to recommence negotiations.

He insisted, however, that the door remained open and hoped it would be possible to resume negotiations quickly.

“As I have recalled to you at our meetings, Ireland itself experienced a very difficult economic period and worked its way through a programme of assistance and has great empathy for Greece and its people.”

1 Irish whiskey sales near milestone of 12m cases a year
2 Should my mam wait for house prices to drop before buying?
3 Hard-hit SMEs get ‘paltry’ €11m worth of loans under State scheme
4 McCanns’ Balmoral sees property value hit from Covid-19
5 ‘I’m so lucky to be in the Caribbean – a million miles from Derry Girls’
6 Pilita Clark: Why we’re about to learn if we are really in the A-team
7 Chris Johns: Past is another country when it comes to our post-pandemic future
8 ‘The recovery needs to be a full-scale economic renewal’
9 Tobacco makers still trying to make a mint from Irish menthol market
10 ‘I have a talent for justifying purchases’
Real news has value SUBSCRIBE