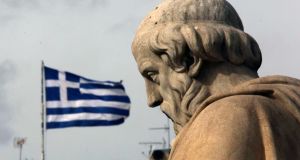 The agreement reached between Athens and the International Monetary Fund, the European Central Bank and the commission covers the main points of a sweeping three-year fiscal and structural reform programme

Greece struck an outline deal with creditors on the terms of a proposed € 86 billion rescue package after a marathon 23-hour session of talks in Athens, marking a breakthrough before an August 20th deadline for its next debt repayment.

The European Commission confirmed that negotiators had “achieved an agreement in principle”. However, Germany, which alongside other euro zone members must ratify the agreement for a third bailout for Greece, appeared reluctant to give its blessing while talks remain open on some details.

Chancellor Angela Merkel told Greek prime minister Alexis Tsipras on Monday night she wanted more time to complete talks and argued for a bridging loan rather than a rushed agreement that would need to be put to the German parliament as early as next week.

Most of the reforms that the Greek government must implement before creditors begin to release funds from the new package have been agreed. But final details of these so-called “prior actions” still need to be worked out on “one or two items”, an official said.

Mr Tsipras recalled Greece’s parliament to enact the reforms tomorrow. Among the prior actions it will pass are a € 50 billion privatisation programme, measures to tackle non-performing loans and the full liberalisation of energy markets.

Negotiators have agreed sharply reduced fiscal targets to reflect Greece’s worsening economic situation. The outline deal calls for a 0.5 per cent primary budget deficit – before debt payments – instead of the primary surplus of 3 per cent of national output forecast in the current budget, the officials said.

If a final deal is not reached in time, the EU may yet have to tap bloc funds to extend Greece a bridging loan to meet its obligations. – Copyright Financial Times Ltd 2015