Pre- and post-election remarks in Greece ‘hadn’t made things easier, to put it mildly’ 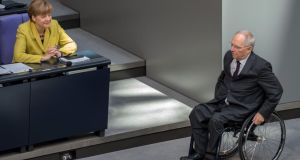 Through gritted teeth, and for very different reasons, a comfortable majority of German parliamentarians backed a four-month extension to the Greek EU/IMF programme on Friday.

After a lively debate on the rights and wrongs of Germany’s eurocrisis strategy, some 542 MPs backed the extension from 587 votes cast, with 32 opposed and 13 abstentions.

The numbers told one story, the stony demeanours in the chamber another, particularly in the benches of the ruling Christian Democratic Union (CDU).

Their finance minister Wolfgang Schäuble acknowledged the disquiet over Greece in his own ranks, noting drily that pre- and post-election remarks in Greece “hadn’t made things easier to put it politely”.

Given the mutinous mood among CDU rank-and-file, Dr Schäuble pulled out the big guns in his speech, calling the programme extension essential for preserving trust in European integration project, in its single currency and in the principle of mutual solidarity underpinning both.

“Trust means ... we cannot blackmail each other but that everyone has to make their contribution,” he said.

Ramming home his point, Dr Schäuble said it was in Germany’s interest to hold Europe together, 70 years after Europe helped Germany recover after its own catastrophe.

Dr Schäuble insisted the Greek programme was working, despite difficulties, and highlighted what he had prevented in talks: rather than a haircut, Athens had committed to servicing all its debts equally, he said, while retaining a primary budget surplus.

The CDU’s junior coalition partner, the Social Democrats (SPD), also backed an extension but its speakers were far less conciliatory, particularly towards Greeks who blame their difficulties on the EU/IMF troika.

“It wasn’t an evil power from outside that hurt them but their own country,” said Mr Carsten Schneider, a SPD deputy Bundestag leader.

The opposition Left Party, meanwhile, accused the Merkel administration of pursuing “kamikaze politics” with austerity measures. However its Bundestag leader Gregor Gysi said his party would back the extension in the hope Athens would use the extension to challenge the Berlin crisis dogma.

“The zeitgeist has changed in Europe,” he said, “and with Syriza we have the first government in Europe that wants to break with the neo-liberal politics in Europe that is supposedly without alternative.”

Mr Gysi dismissed the idea that Berlin loans to Athens were aiding Greeks, saying “90 per cent has landed with banks, including the German banks”.

When it finally came, the sizeable Bundestag backing for an extension was cold comfort for CDU leader Angela Merkel. She knows that patience is wearing dangerously thin among her deputies on Greece. The numbers spoke for themselves: while the opposition Left Party almost unanimously backed the programme extension, 29 of Dr Merkel’s own deputies refused -- a new record. That number could swell further if, as SPD speakers flagged yesterday, a vote on a third Greek programme is required early in the summer.

As the Athens drama enters its end-game a summer of discontent looms in Berlin.

1 How much state pension will I get next year?
2 Oxford Covid vaccine trials offer hope for elderly
3 Tesco takes to the skies with home delivery by drone
4 Apple planning updates to its AirPods earbuds next year
5 Investors unnerved by Brexit, Covid-19 and US election jitters
6 Liam Neeson among new investors backing €100m Ireland Impact fund
7 Some Irish money market funds came close to danger in March
8 Charting the stock markets: does technical analysis work?
9 How to . . . move (almost) everything to your new phone
10 Ulster Bank to introduce new card payment controls on app
Real news has value SUBSCRIBE