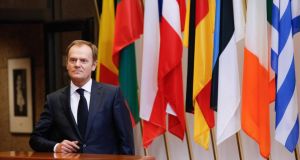 The summit of EU leaders will be the first under new European Council president Donald Tusk. Photograph: Julien Warnand/EPA

While the EU’s investment plan and the situation in Ukraine had been expected to dominate the summit – the first under new European Council president Donald Tusk – a number of member states, including France and Spain, have successfully led a last-minute push to put aggressive corporate tax planning on to the agenda.

Though the European Council is expected to agree to new rules around transparency, France was pushing for EU leaders to commit to “tax harmonisation” at EU level.

“The lack of tax harmonisation in the European Union is one of the main causes allowing aggressive tax planning, base erosion and profit shifting (Beps) to develop,” the letter said.

German officials in Berlin said yesterday that the push by individual member states on aggressive tax practices was welcome, but was only the start of a process.

“It is important that this is supported by the European Council,” said a senior government official in Berlin. “There needs to be even more intensive co-operation on this and this will certainly be part of this European Council meeting.”

The European Union has intensified its drive against aggressive tax planning following revelations about the tax rulings offered to companies by member states, particularly Luxembourg.

It plans to introduce rules early next year obliging countries to automatically share information regarding agreements negotiated by tax authorities and individual firms.

There was some reprieve for Ireland as the European Commission has announced it was extending its demand for information on tax rulings to all 28 EU member states.

The commission has requested an overview of tax rulings provided by six member states to assess whether they are in breach of state-aid rules and has initiated investigations into three countries – Ireland, the Netherlands and Luxembourg.

1 Farmer seeks to challenge €3.6bn Intel plan in High Court
2 Council tells Johnny Ronan firm to keep the noise down at D4 Embassy venue
3 Election proposals may make the housing crisis worse
4 Who are Ireland’s 17 billionaires?
5 Cosgrave should give his speech to Web Summit’s partners in Saudi Arabia
6 Auction politics: Can we afford to pay for the parties' election promises?
7 Credit headwinds remain despite positive 2019 – S&P
8 Can I force brother to show me our mother’s will?
9 Construction begins on Galway’s €105m Bonham Quay
10 Are you a Monica, Joey or Chandler when it comes to your data privacy?
Real news has value SUBSCRIBE