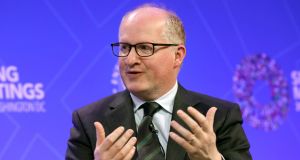 Irish Central Bank governor Philip Lane at the forum on booms and busts during the IMF spring meeting in Washington, US. Photograph: Reuters/Yuri Gripas

The Irish economy is better placed to withstand a recession this time around, according to Central Bank governor Philip Lane. The higher levels of equity being used to finance investment in Ireland differentiates the current economic situation from the previous crisis, he said.

Speaking on Saturday during a panel at the IMF spring meetings in Washington, Mr Lane said one of the lessons of the crisis was the dangers of debt finance and the “amplification effect” of debt burdens. And while there was now a fair amount of real estate activity in Dublin, most of it was equity financed, often by global equity.

“It’s very important to recognise that there are different categories of boom and bust cycles. What happened in Ireland and Spain was a classic plain vanilla real estate boom-bust cycle,” he said, noting that the Irish experience was a typical example of the dynamic whereby “something good – a rapid growth rate in the 1990s – turns into euphoria, gives excessive confidence to people investing in property”.

He noted that the reorientation of the economy away from construction to exports and other activities had occurred in Ireland, and there was now more equity in the system than during the previous boom-bust cycle.

Mr Lane was speaking at a session titled: “Booms and Busts: Are we better able to deal with them today?” on Saturday at IMF headquarters in the US capital.

The IMF’s first deputy managing director David Lipton struck a cautionary tone about the preparedness of the global economy for another recession. “Surely there is going to be another recession – the question is how dangerous a recession, what kind of recession it might be. We need to look very carefully at the debt situation.”

He also said that while there had been important financial and regulatory reforms, he feared that “people are quick to forget”.

Asked about the role of central banks in guarding against economic instability and the threat of boom and bust cycles, Mr Lane said central banks “try to respond to the world they see” and “avoid exacerbating things”.

However, he also noted that there were other factors at play such as fiscal policy and structural reform. He noted that multilateral institutions such as the EU and the IMF helped to keep economies focused. “It is tempting at a national level to say: this time things are different,” he said.

Speaking after the session, Mr Lane confirmed that the Central Bank was on track to ensure that most customers affected by the tracker mortgage scandal would be recompensed by June, with the Central Bank due to publish an update on the issue this week.

The bank is also preparing a report for June outlining how banks should become more consumer-focused.