Euro down but showing few signs of panic over Greece

Shared currency holding up despite crisis in Athens 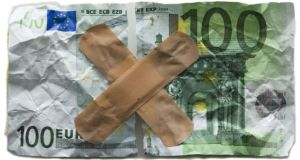 Despite the relative calm, the cost of hedging against sharp swings in the euro against the dollar over the next week, which covers the period of Greece’s referendum, jumped to its highest in over five years

The euro proved broadly resilient on Monday to Greece’s moving one step closer to an exit from the single currency, helped by intervention by the Swiss National Bank and investors concluding that the situation in Athens still has some way to run.

Greece looks virtually certain to miss a debt repayment to the IMF on Tuesday as the country’s European partners shut the door on extending a credit lifeline after Athens announced a referendum on bailout terms.

But though the euro initially fell sharply in response, to as low as $1.0956, in European trade it was trading within recent ranges at $1.1112 as investors displayed a “complete lack of panic” over Europe’s single currency, as Rabobank senior currency strategist Jane Foley put it.

“If people were questioning the whole coherence of the EMU, then they would want to get out of the euro. The euro’s resilience suggests that people don’t believe that the EMU will fall apart, even if Greece exits,” Ms Foley said, highlighting a move into safe-haven German Bund yields as evidence that investors are not pulling out of European assets completely.

“Maybe the market doesn’t believe that a Greek exit could create the type of contagion that it would have done a few years ago. But if there is a no vote at the weekend, that theory will be tested.”

Ms Foley also said that worries over Greece made the euro less attractive as a funding currency for carry trades, in which investors borrow the euro and then sell it to buy higher-yielding currencies, and that therefore was lifting it.

Despite the relative calm, the cost of hedging against sharp swings in the euro against the dollar over the next week, which covers the period of Greece’s referendum, jumped to its highest in over five years, reflecting concern that volatility could escalate.

Earlier, the Swiss franc, which tends to appreciate at times of market uncertainity, had traded at a four-week high of 1.0315 francs per euro. But it came off those highs as the Swiss National Bank said it intervened in the market to weaken it, and was last trading up 0.6 per cent at 1.0367 francs.

“The Swiss authorities want the euro/Swiss back up at 1.30, let alone where we are now,” said Neil Mellor, a currency strategist at Bank of New York Mellon in London.

The yen, also a popular safe-haven currency, was up 1.3 per cent against the euro at 136.125. It had earlier surged to a four-week high of 133.80 yen as investors initially fled to safety.

Given relatively low liquidity as investors cut their euro positions, Bart Wakabayashi, head of foreign exchange for State Street Global Markets in Tokyo, said the euro’s drop so far did not suggest any panic selling in the foreign exchange market.

“It’s been surprisingly orderly, as the reaction was expected because of the headlines over the weekend. It could have been much uglier,” he said.