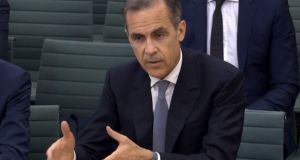 Bank of England governor said the bank is not making a judgment on the consequences of Britain’s referendum on its European Union membership.

The central bank takes into account “the movements in asset prices,” the BOE governor told MPs in London on Tuesday.

It is “increasingly clear” that the moves in the pound and in options that insure against a fall in sterling at a future date “have spiked to levels” similar to those seen in the Scottish referendum campaign, he said.

With traders already pushing back bets on the timing of a BOE interest-rate increase, the prospect of Britain leaving the European Union, world’s largest single market, is creating further uncertainty.

On Monday, the pound fell to the lowest since 2009 after London Mayor Boris Johnson said he’ll campaign for Britain to leave the bloc in June’s referendum.

Mr Carney is testifying to UK MPs alongside deputy governor Minouche Shafik and officials Gertjan Vlieghe and Martin Weale. The BOE has kept its key rate on hold at 0.5 per cent for almost seven years and the market yield curve shows a 25 basis-point rise is not priced in until 2019.

Deputy Governor for Financial Stability Jon Cunliffe said last week that markets may be “wrong” or the yield curve may reflect the growing downside risks. The chairman of the Treasury Committee, Andrew Tyrie, said

Mr Carney and Mr Cunliffe will appear before lawmakers on March 8th in a session devoted to so-called ‘Brexit.’

Bank of Ireland to provide €1m for arts projects over next two years 05:30
‘I have three children and a dog, so I feel like a bit of a human ATM’ 05:30
Pilita Clark: Companies should consider having a head of remote working 05:15
Ireland a world leader on cancer therapies, but behind on access 05:04
Data privacy advocate submits further evidence in Google ads inquiry 05:00

1 Aldi empire wracked by family feud
2 FinCEN Files: Dublin business features in leak of US treasury documents
3 A look at Elon Musk’s track record ahead of Tesla’s ‘battery day’
4 The FinCEN files: Unchecked by global banks, dirty cash destroys dreams and lives
5 Supermac’s McDonagh eyes fuel group expansion with Ennis plaza
6 Chris Johns: We’re in for a triple whammy of Covid, Brexit and the US elections
7 Pilita Clark: Companies should consider having a head of remote working
8 Volkswagen close to selling its Bugatti supercar brand
9 Norway extends loan guarantees for Norwegian Air
10 How to manage and innovate at the same time
Real news has value SUBSCRIBE