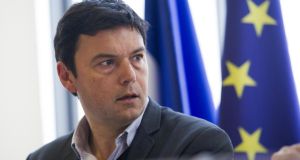 Having surged to the top of best-seller lists, Thomas Piketty’s Capital in the Twenty-First Century continues to be among the most talked about economics books of the year. And few economists ever inspire popular movements like he has.

Inequality has now become central to the public debate over economic policy, and much of this discussion, focuses on the sharp increases in the share of income and wealth going to the top 1.0 per cent of the population.

This Friday, Piketty will be in Dublin to speak at the Tasc annual conference. The conference aims to outline proposals for tackling economic inequality such as tax reductions, tax credit increases and the lowering of VAT.

Against this backdrop, the conference will examine the relationship between economic inequality and wider measures of personal and societal well-being, and the impact of current economic policies on inequality.

Piketty will give the keynote address with a response coming from Central Bank governor Patrick Honohan.

Other speakers include Prof Gary Dymski of Leeds University, who will put forward 10 proposals to break the links between finance and inequality and Dr Elissa Braunstein of Colorado State University, who will explain how giving people on lower and middle incomes wage increases will benefit the wider economy.

“Reducing VAT would be progressive and also boost consumer spending and economic growth.”