ECB ‘ready to do its part’, says Draghi 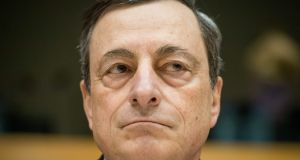 Mario Draghi, president of the European Central Bank (ECB) has said the bank will do its part in supporting the euro area.

The European Central Bank “is ready to do its part” to make the euro area more resilient, ECB chief Mario Draghi said on Monday, reiterating the bank’s intention to reconsider its monetary policy stance at its governing council meeting next month.

Addressing the European Parliament’s economic and monetary affairs committee in Brussels, the central bank chief said that the first weeks of the year had shown that both the euro area and the EU at large “face significant challenges.” But he stressed that the European banking sector remained resilient.

“The situation in the banking sector now is very different from what it was in 2012. Perhaps most importantly, euro area banks have significantly strengthened their capital positions”, he said, noting that the common equity tier One ratio has increased from around 9 per cent to 13 per cent.

Mr Draghi was addressing the European Parliament’s finance committee against the background of increasing concerns about the state of the global and European economy. Equity markets and bank stocks in particular have seen steep falls since the beginning of the year, fuelled in part by concerns about the slowdown in China and the fall in oil prices.

Addressing MEPs at his quarterly appearance at the European Parliament’s economic and monetary affairs committee, Mr Draghi acknowledged that some parts of the banking sector still faced a number of challenges, including “uncertainty about litigation and restructuring costs in a number of banks to working through a stock of legacy assets.”

But he said that non-performing loans had been identified by the ECB’s Comprehensive Assessment tests in 2014 and had been adequately provisioned for. “Therefore, we are in a good position to bring down NPLs in an orderly manner over the next few years,” he said.

Amid criticism from some investors that new European bail-in rules which came into force on January 1st may have fuelled market uncertainty, Mr Draghi said that similar rules were already in place in most other countries.

“The transition to these new bail in rules [IS]a very significant change and it’s a change we think for the better....In this way tax payers’ money is not going to be used as unfortunately happened during the crisis,” he said, noting that banks had enough loss-absorption capacity.

On the question of Britain’s renegotiation of its relationship with the European Union, Mr Draghi said the ECB was not a party to the negotiation, but he said that the “ideal objective” of the discussions would be to anchor the UK in the EU in a way that would both benefit Britain and the EU.