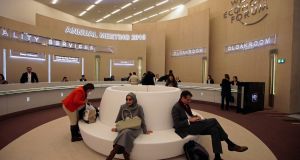 Attendees rest on seating between sessions during the World Economic Forum (WEF) in Davos Photograph: Bloomberg 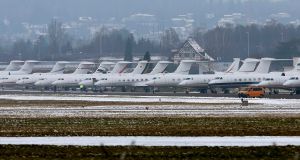 Passenger jets are parked at the Swiss Airforce base in Duebendorf, Switzerland, akin to a carpark for elite WEF participants Photograph: Reuters

Fear of a severe weakening of the European Union is the hot topic in the corridors and executive suites of Davos this year with business leaders and politicians at the World Economic Forum alarmed at closing borders and the risk of a British exit.

For three years from 2010 to 2012, bankers and corporate chiefs fretted about the danger of a break-up of the single currency at the heart of the 28-nation bloc, until the European Central Bank said it would do whatever it took to preserve the euro.

Now it is the European Union itself that is seen at risk, buffeted by a sea of crises over migration, security, rising anti-European populism, illiberal trends in central Europe and a highly uncertain British referendum on continued membership.

Four years after it was awarded the Nobel Peace Prize in the midst of the euro crisis for its role in peace and reconciliation in Europe, the EU is the sick man of Europe.

While some politicians and economists from countries such as China and Turkey say the EU should get over its funk and have more confidence in its gradual economic recovery and its rules-based model of governance, the Europeans themselves are among the most worried.

“A ‘Brexit’ would be a turning point in EU integration, which has, so far, been seen as largely irreversible,” said former Swedish prime minister Carl Bildt, who chairs the WEF’s Global Agenda Council on Europe.

“Other European governments would come under pressure to offer their voters a vote on EU membership too, and the resulting calls for national ‘special deals’ might handicap EU policy-making for years to come,” he said.

He cited four threats to the EU’s cohesion this year from the problems in absorbing more than a million migrants while preserving the Schengen open-border area, a possible British vote to leave the bloc, keeping free trade alive and the internet and digital commerce open.

“If Britons vote to leave the EU in 2016 or 2017, the UK will probably disintegrate and the entire European integration project will suffer a possibly irreversible setback,” a WEF report released on Thursday said.

Prime minister David Cameron sought to scotch such talk with a resolutely upbeat speech, saying he was determined to secure Britain’s future in a reformed EU and inviting the business community to explain the benefits of membership to the public.

European leaders from Socialist French Prime Minister Manuel Valls to conservative German Finance Minister Wolfgang Schaeuble lined up on the same platform to warn that a British departure - which current opinion polls suggest is as likely as a vote to stay - would be a “tragedy” and a “disaster” for both sides.

Senior executives asked whether Mr Cameron had the situation under control and how he was going to turn Eurosceptic public opinion around, notably in his own Conservative party.

“If there is uncertainty around things business is at its worst,” said Unilever chief executive Paul Polman.

The Dutch and Swedish prime ministers added urgency to the sense of gloom around the EU by telling WEF audiences that Europe has just 6-8 weeks to save the 26-nation Schengen zone of passport-free travel from collapse.

This week alone, Austria has announced more border controls and put a reduced ceiling on the number of refugees it will admit this year, precisely the commitment that German chancellor Angela Merkel is trying to avoid.

Business leaders warned in closed sessions of serious damage to the economy if border controls are reintroduced for citizens, with dangerous knock-on effects for the free movement of goods in the EU’s single market.

“The EU is on the verge of collapse,” billionaire US investor and philanthropist George Soros said in an interview published just before the WEF meeting.

“The Greek crisis taught the European authorities the art of muddling through one crisis after another... The EU now is confronted with not one but five or six crises at the same time.”

As European countries raise border barriers to stop refugees flooding in, the prospect of delays for EU citizens and bottlenecks for the transport of goods around its single market is worrying businesses.

“If the belief is that we’re going to move further in that direction, as opposed to moving back toward open borders, that would have a significant effect on the ability to staff projects, the ability for businesses to be able to hire folks, to get talent in the right position. All things that are necessary for growth in the European economy.”

Beyond those immediate dangers, former Swedish finance minister Anders Borg, now a WEF official, pointed to growing pressures that both right-wing and left-wing populist political forces are applying on political systems around Europe.

“These (west European) countries need deep structural reforms of their economic and social systems but there is such an underlying lack of trust in governments and business that these forces will restrict what can be achieved,” Borg said.

1 Michael O’Leary is the boss you want to lead an airline out of crisis
2 Ireland is in danger of losing the woods for the trees on emissions reduction
3 High Court told FBD staff texts discussed policies in ‘disparaging terms’
4 Estée Lauder staff at Dublin airport plan further strike action
5 Irish company to test vaccines on volunteers deliberately infected with Covid-19
6 Air travel never going ‘back to way it was’
7 The wealth of the Irish – how do your assets match up?
8 Online shopping makes town centre jobs unviable, says Next boss
9 Workvivo to create 100 new jobs in Cork as business booms
10 Fortnite owner signs multimillion deal to buy Irish ‘kidtech’ firm
Real news has value SUBSCRIBE