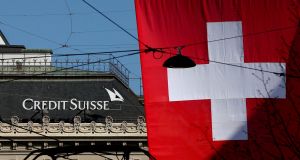 Credit Suisse is on course to become the first international bank to set up a major trading floor in Dublin.

The Swiss bank wants to move 40 traders and 60 support staff to Ireland as part of a cost-cutting drive, sources familiar with the plans said. That will create one of the biggest trading floors in Dublin, a city which has long attracted support functions of some of the world’s biggest banks.

Credit Suisse’s talks with the Central Bank of Ireland predate the restructuring announcement, but are part of the same drive to cut costs, a source familiar with the situation said. He would not comment on how many other jobs could go to Dublin.

Credit Suisse declined to comment on the new Dublin trading floor as did the IDA, Ireland’s inward investment agency. The Central Bank of Ireland would not comment on the status of Credit Suisse’s licence application, which was filed more than six months ago.

Sources familiar with the situation said Credit Suisse has already begun sounding out London-based trading staff about moving to Dublin.

They will join a trading community in Dublin that is a world apart from the Canary Wharf hub where they now sit a stone’s throw from thousands of their peers. Some other international banks have small trading operations in Dublin but the only two large ones are Bank of Ireland’s, which has about 175 traders, and AIB’s, which has about 115.

However the Irish capital is the European headquarters for Virtu Financial and Susquehanna Investment Group, two US high-frequency traders that are among the biggest participants on global markets.

Financial sources said other banks were also looking at moving various operations to Dublin — both for costs reasons, and as a hedge to ensure continued access to the EU market if Britain votes to leave the common market. A source familiar with Credit Suisse’s thinking said “Brexit” was not a factor in the bank’s Dublin plan.

As well as offering lower property prices and wage costs than London, Ireland also has a 12.5 per cent corporate tax rate, well below the 20 per cent companies in the UK are charged. Citi, Bank of New York Mellon and State Street already have large operations in Dublin.

Cost cuts have become particularly pressing for banks after a wave of post-crisis regulations that forced them to hold dramatically more equity. The extra capital means banks have to make more profits if they want to keep their return on equity at the levels shareholders demand.