Consumer prices continue to fall by an average of 0.2% 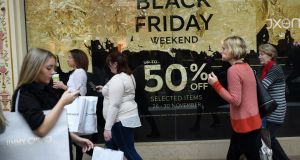 The Irish economy remains in the grip of deflationary pressures largely because of cheaper transport costs.

The latest Consumer Price Index (CPI) suggests the average basket of goods and services was 0.2 per cent lower in November than a year ago.

The primary drivers were decreases in transport (-5.3 per cent), clothing and footwear (-3.6 per cent), and furnishings and household equipment (-2.3 per cent).

Conversely, there were increases in the cost of education (3.8 per cent), communications (1.8 per cent) and restaurants and hotels (1.4 per cent).

The CSO said transport costs fell due to lower petrol and diesel prices, a reduction in the price of vehicles and a fall in air fares, which was partially offset by an increase in bus and taxi fares.

A fall in the cost of clothing and footwear was put down to sales.