Construction levies may end to boost build of low-cost homes

In move to provide 15,000 homes annually councils would have to forgo €100m per year 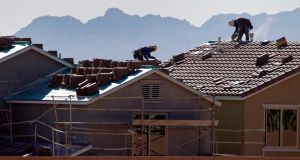 One suggestion is that the scheme would be confined to properties priced in the region of €300,000. Photograph: Reuters

Builders would not be required to pay levies to local authorities when they construct starter homes in Dublin and some other parts of the country, under a plan being worked on by the Government.

In a move to provide some 15,000 new houses and apartments annually, builders would not be required to pay the development levies in regions where there is a shortage of properties for first-time buyers.

The proposal is under scrutiny in contentious pre-budget talks between the departments of finance and environment. However, there is still no agreement, as local authorities would have to forego up to €100 million in levies from builders.

One suggestion is that the scheme would be confined to properties priced in the region of €300,000, with the duration of the initiative and geographic limits set in advance to direct activity towards areas with the greatest need.

Given heavy constraints on new public expenditure next year, Minister for the Environment Alan Kelly has been told to examine how funds from his current budget could be redirected to local authorities to bridge the gap.

Officials are also assessing whether there is scope for local authorities to reallocate funds within their own resources.

The discussions come against the backdrop of divisions over Mr Kelly’s proposal to curb rent increases in the private rental market.

Mr Kelly wants to tie any rise in rents to inflation for four years, but the Department of Finance is reluctant to agree as it believes the key underlying problem is the shortage of new housing. As a result, the levy waiver is being cast in some quarters as a quid pro quo for measures on private rents.

A source said it had been made clear to Mr Kelly any scope to increase his department’s budget to provide funds to compensate local authorities for levies is extremely limited.

Also under scrutiny in the effort to boost the supply of starter homes are steps to reset building standards introduced in 2007.