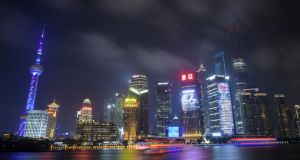 The financial district of Pudong in Shanghai: officials from the city travelled to Ireland as part of China’s Senior Officials Training Programme. Photograph: Johannes Eisele/AFP/Getty Images

The current crackdown on extravagance and corruption has made overseas travel for government officials in China a lot more difficult than it used to be.

But clearly the local government in Shanghai and the surrounding region see the value in the Senior Officials Training Programme, which began last year and is aimed at promoting and developing avenues for Ireland’s economic interests in Shanghai and the economy of the region.

The 16 government officials were accommodated with families in Dublin and Cork and they included education officials from Shanghai, Jiangxi and Nanjing, and officials responsible for agriculture, electronics, commerce and foreign affairs as well as a representative from the Food and Drug Administration.