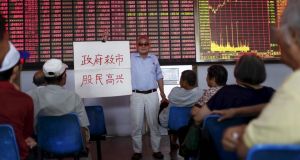 An investor holds a board showing “government saves the market so that investors will be happy” at a brokerage house in Shanghai, China. Photograph: Reuters/Aly Song

China stocks, led by small caps, extended their recovery for a third day yesterday, raising hopes that measures taken by Beijing to prevent a full-blown market crash have worked.

Shares climbed, with a gauge of smaller companies capping its biggest advance in more than six years, as hundreds of stocks resumed trading and export data exceeded economists’ estimates. The number of halted companies fell by 408 from Friday to 1,045, or 36 per cent of overall listings on mainland exchanges.

“Bargain-hunters are focusing on small caps that were hit the most during the market rout,” Dai Ming, a fund manager at Hengsheng Asset Management Co, said in Shanghai. “The market doesn’t have too much interest in big companies. They were the outperformers in the market plunge.”

The Shanghai gauge has rebounded 13 per cent in three days after unprecedented government intervention to end a rout that wiped almost $4 trillion of value.

Brilliance, which makes minivans for China’s domestic market and assembles luxury cars for BMW via its joint venture with the German carmaker, said it expected first-half profit to fall 40 per cent from a year earlier mainly because of lower results from its BMW Brilliance 50 per cent-owned joint venture.

On the stock markets, regulators have launched a fresh crackdown on margin-lending as signs have re-emerged that speculators – who only a few days ago scrambled to unwind their leveraged positions – are again borrowing money to bet on the rebound.

Having briefly rallied above the a key psychological level of 4,000 points, the Shanghai index is now midway between last week’s four-month low and a perceived ceiling of 4,500 points, a level under which a government-backed bailout fund, formed by 21 brokerages, has promised not to sell.

“This is victory in the first battles of a long-lasting war,” said Hou Yingmin, analyst at brokerage Aj Securities.

“It takes time for market sentiment to fully recover from the recent trauma, which was so severe, and bears are likely to make a comeback any time soon.”

Yesterday, the market sentiment was underpinned by China’s June trade data, which was a surprise on the upside.

Shenzhen’s ChiNext shares rebounded sharply for a third consecutive session, up 4.9 per cent.

The CSI300 banking index, however, fell 3.1 per cent, a sign that buying interest in blue-chips has waned. – (Reuters)