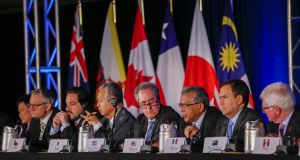 Some of the biggest trading entities in the region have been circling each other for the past few weeks after a US-led trade deal was struck between 12 Pacific Rim countries, the biggest in decades.

The Trans-Pacific Partnership (TPP) aims to cut trade tariffs and set common standards in member countries including the US, Japan, Australia, Brunei, Canada, Chile, Malaysia, Mexico, New Zealand, Peru, Singapore and Vietnam, which together make up 40 per cent of the world’s economy.

China cautiously welcomed the TPP, saying it was “open to any mechanism” that follows World Trade Organisation rules, but has not indicated whether or not it will join, while also expressing scepticism about whether the partners will have the political will to push the deal through at home.

The pact is a tough one for Beijing to back. Even though some of the terms would act as an incentive to push reform, the restrictions on favourable treatment granted to state-owned enterprises, which dominate China’s economy, might make the TPP too difficult to swallow for the Chinese. In reality, China looks most likely to push for its own trade agreements, which will take place more on Beijing’s terms, in keeping with the government’s aim of boosting its standing in the region and also keeping check on Washington’s reach into the Asia Pacific region in China.

Beijing negotiators have stepped up China’s push for the conclusion of its Regional Comprehensive Economic Partnership (RCEP) and they meet this week for talks.

Chinese commentators have warned that the dominance of the US in the pact would consolidate the position of the dollar as the dominant global currency. “Under such circumstances, the financial resources of the 12 TPP members will be integrated and indirectly controlled by the US. This is something that will hurt China’s efforts to boost exports and promote the use of its currency globally,” Zhao Zhongxiu, a trade professor at the University of International Business and Economics in Beijing, told China Daily.

Professor of strategic management at Warwick Business School Kamel Mellahi believes the TPP would be much greater with China in than out.

“China giving cautious approval to the TPP agreement is understandable however. After all, China is focusing on its own ‘Silk Road’ strategy,” said Mellahi. “I would say China’s response to the TPP has been ‘if you can’t join them, beat them’.

“The TPP has many advantages but the Silk Road strategy is a much better fit for China. Its vision, goals and objectives are aligned more closely with China’s economic goals than the TPP,” he said.

“First, the EU is only gradually recovering since 2012 and it is the largest driver of global trade. Second, the US reduced its oil dependency significantly in the past three years. Third, there has been no significant breakthrough in any trade agreements for over a decade.

“The TPP may partially address the last point. The main thing to watch now will be whether President Barack Obama will manage to receive Congress approval.”

Given the strong anti-China rhetoric coming out of the Republican camp ahead of the elections, it will probably be easier for Obama to convince Congress to back the plan but anything can happen with an election looming. The Communist Party, which doesn’t allow meaningful elections, is well aware of this.

1 If tourists are such pariahs should we not be testing them on arrival?
2 ‘My rent here is so low it’s a joke’
3 EU court to rule on the Apple state aid case
4 Paschal Donohoe’s election as Eurogroup president ‘a great win for Ireland’, says Taoiseach
5 Indoor vertical farming is the future says Irish agritech start-up
6 Irish animators drawing international attention
7 Varadkar and Donohoe to meet banks to discuss mortgage breaks
8 Will family’s tax debt stop me getting my inheritance?
9 The property developers who survived the crash
10 Over 2,000 march in Athenry in support of Apple data centre
Real news has value SUBSCRIBE