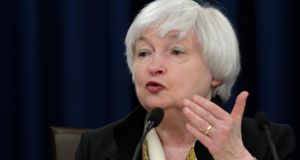 The message from the meetings in Jackson Hole was clear: there is no winding the clock back to the pre-crisis world of central banking as officials seek ways of improving their monetary weaponry.

The point was made by Janet Yellen, the Federal Reserve chair, in the speech that opened the Kansas City Fed’s annual symposium – a gathering of the central banking elite in Grand Teton National Park.

Fighting the next recession, she said, would be likely to involve the new tools that the Fed invoked during the financial crisis – not just rate cuts but also asset purchases and forward guidance. She also raised the prospect of further changes by future generations of policymakers, including changes to the central bank’s inflation target and purchases of alternative kinds of assets when it needs to do quantitative easing.

Interventions by fellow central bankers bore out that impression. Governor Haruhiko Kuroda of the Bank of Japan (BoJ) said he saw “ample space” for further loosening of the institution’s monetary policy, as he defended the central bank’s attempts to bolster growth and inflation via policies including negative rates.

The BoJ wrongfooted markets in January when it set a minus 0.1 per cent rate on some deposits that banks place at the central bank. Growth and inflation have disappointed since then.

Mr Kuroda said the BoJ’s easing efforts including negative interest rates amounted to an “extremely powerful” policy scheme, adding that the central bank would take further action without hesitation if it was necessary to achieve its price stability target.

Benoît Cœuré, a member of the European Central Bank’s executive board, told the conference that the unconventional measures being deployed by big central banks could come with unwanted side-effects.

Nevertheless, if other parts of governments did not do their part to bolster economies, the ECB “may need to dive deeper into our operational framework and strategy to do so,” he argued.

Papers presented at the conference support the notion that central banking will remain in the brave new world it entered, after the crisis forced policymakers to rip up traditional templates.

On Saturday, for example, Jeremy Stein, a former governor of the Fed who is now at Harvard, presented an argument that the US central bank should maintain large balance sheet instead of allowing its holdings of assets to shrink radically back towards its pre-crisis profile.

He argued in a presentation that this would ensure that there was an ample supply of safe, government-provided short-term claims. This would compliment the Fed’s efforts to improve financial stability and reducing the tendency of private-sector financial companies to finance risky assets using large amounts of short-term debt.

The paper comes amid an intense debate within the Fed as to how far it should allow the $4.5 trillion balance sheet it amassed during quantitative easing shrink as it heads back to a supposedly more normal monetary policy.

The possibility of central banks holding vast quantities of debt on their balance sheets for a long time raises the risk of blurring the boundary between monetary and fiscal policy, raising new questions about central bank independence.

The previous day Marvin Goodfriend, a professor at Carnegie Mellon University, told policymakers they should be thinking of ways of pushing interest rates into even more negative territory in order to stimulate their economies.

The former Federal Reserve Bank of Richmond economist wrote back in 1999 that negative rates were a feasible option years before central banks started actually experimenting with them. Today the BoJ, ECB and several other European institutions have implemented negative rates to prop up growth and prevent deflation.

However, the various means Mr Goodfriend proposed to permit more deeply negative rates would raise huge challenges. Among them is the outright abolition of cash to prevent retail depositors from taking money out of their accounts and hoarding it in their mattresses, or the creation of an electronic currency on which the authorities can set a positive or negative interest rate.

The protracted period of ultra-low rates has already provoked deep concerns in the financial sector, including among pension funds and insurance companies, and has triggered worries that bank profits could be impaired. – (Copyright The Financial Times Limited 2016)

1 Life as a Facebook moderator: ‘People are awful. This is what my job has taught me’
2 Ombudsman upholds 8 tracker complaints against banks
3 Irish in-flight entertainment firm blames coronavirus for closure
4 How well paid do you think you are? Here’s how to work it out
5 Ibec warns that Government may have underestimated corporation tax loss
6 FBD rejects ‘insurance rip-off’ accusations as profits spike and dividend doubles
7 Flight attendent seeks High Court injunction against Aer Lingus
8 Tax burden on Irish households among lowest in EU
9 Wealthy investors’ legal challenge against Revenue fails
10 Coronavirus: ‘All bets are off’, says aircraft industry chief
Real news has value SUBSCRIBE