ESRI: Next government may have to forgo tax cuts to prevent economy overheating 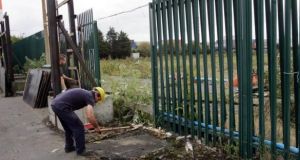 One of the largest undeveloped sites in Dublin is the 10 hectare Irish Glass Bottle site in Ringsend. It was bought in 2006 for €412 million by a consortium that included the State’s Dublin Docklands Development Authority.

The Government should consider a new land tax to encourage developers to build homes on vacant property, the Economic & Social Research Institute has said.

Weeks ahead of the general election campaign, the think-tank has also indicated the next government may have to forgo tax cuts to prevent overheating in the economy as growth accelerates.

The ESRI’s commentary said a strong rate of economic growth next year will come close to 5 per cent while the unemployment rate will drop from 8.9 per cent at present to 7.5 per cent by the end of 2016.

However, the institute warned that a big shortage in the supply of new homes presents a risk to the favourable outlook.

“There is some scope for Government policy to impact positively as far as the supply side is concerned,” said Kieran McQuinn, ESRI associate research professor.

Citing a Danish example, the ESRI said a land tax which increased in line with house and land prices had been an incentive to sell or use underdeveloped and vacant property in periods of increased demand.

“In terms of Denmark, for instance, there is evidence that land taxes can play a positive impact in terms of bringing undeveloped or vacant land into supply quicker than we would expect,” said Prof McQuinn.

He cautioned that there was much to learn from past interventions such as the urban renewal scheme, which led to inflation in prices.

With rents and prices rising, however, Prof McQuinn said housing construction would not reach the target level of 25,000 a year until 2018 at the earliest.

The ESRI said a statutory timeline in planning regulations could prevent delays in developments. It also said government grants in Britain to subsidise stalled projects had eased supply pressures.

The institute said that while Government targets for the construction of social housing were unlikely to be met, an increase in local authority schemes could tackle the shortfall.

The ESRIsaid a pre-budget boost to expenditure this year was “particularly disappointing”. Despite the relatively high unemployment rate, it said the growing economy did not need the stimulation provided by the budget.

Having found that the prospect was already opening up to bring the public finances close to balance in 2017, it said the next government would have to consider running a budget surplus to prevent overheating in the economy.

“There’s very little if any role for fiscal policy to stimulate activity in the new year or beyond,” said Prof McQuinn.

“If the economy continues to grow as robustly as it has in the last two years and as it may well in 2016, we may actually need to start targeting surpluses in 2017 as a way of taking heat out of the economy.”

Such a course of action would be at odds with Government plans to deliver further income tax cuts as recovery proceeds. The ESRI forecast gross domestic product will grow this year by 6.7 per cent and by 4.8 per cent in 2016.