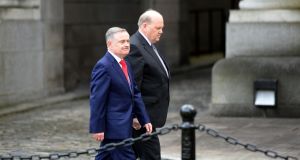 Ministers Michael Noonan and Brendan Howlin: survey asked how important companies considered Budget 2016 was to the outlook for their businesses. Photograph: Eric Luke

Irish business sentiment has hit a nine-year high on the back of a “marked step-up in business activity” over the past three months.

The latest KBC Bank/Chartered Accountants Ireland (CAI) sentiment index increased to 130.8 in the third quarter, its highest level since the survey began in late 2006.

The report highlighted a rise in business activity during the period, with more companies reporting output gains and fewer reporting reduced output than at any other time.

The findings come as Ireland looks set to be the fastest growing economy in the EU for a second year running, with most experts forecasting gross domestic product (GDP) to expand by nearly 6 per cent this year.

The latest survey asked how important companies considered Budget 2016 was to the outlook for their businesses. The responses, however, suggested budgetary measures were not generally regarded as the key determinant of business prospects. Export market trends tended to be the most widely cited influence, followed by cost trends and currency movements.

A capacity to successfully buy and sell on world markets was also cited as a main driver of the fortunes of corporate Ireland, the report said.