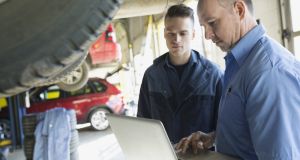 Minister for Finance Michael Noonan promised a new “SME-focused” regime in budget speech, but opted to delay its introduction until Budget 2018

The Government has eased the capital gains tax (CGT) regime for entrepreneurs and start-ups, halving the rate on business disposals from 20 per cent to 10 per cent, the second year in a row the rate has been cut.

Minister for Finance Michael Noonan has retained the ceiling for the lower CGT rate at €1 million, however, which is likely to disappoint investors. He promised in future to review the limit, which compares to a corresponding cap in the UK of £10 million (€10.9 million).

Brian Caulfield, a well-known tech investor and partner in Draper Esprit, said the budget was “disappointing” for entrepreneurs.

Mark Flood of Renatus Capital, a private equity company which invests in SMEs on both sides of the Border, said the differential in CGT limits between North and South was costing the South investment. He said the cut in the rate by Mr Noonan was a “baby step” but the cap must be addressed in future budgets.

The reduced CGT rate “does not bring us onto the racetrack” when the UK had a ceiling 10 times the scale of Ireland’s £1 million threshold, he said.

“In a situation where exporters are beginning to look at shifting production to the UK in order to secure their sakes there, we need to ask what signal this Government is really sending out to the people who are creating the greatest share of employment in this country.”

Entrepreneurs and start-ups, especially in the tech sector, also hoped for a more competitive tax regime for share-option payments, following a public consultation on the issues this year.

Although the Minister did promise a new “SME-focused” regime in his budget speech, he opted to delay its introduction by a year until Budget 2018. Officials will in the meantime hold discussions with the European Commission to ensure any new regime meets state aid rules.

EY said it was “disappointed” at the delay in introducing a new share payments scheme and also about the retention of the €1 million CGT limit.

Mr Hardy said it was important that the regime around share-based payments was “well-designed” and not rushed.

Mr Caulfield, however, was disappointed a new shares regime was not introduced and said he had witnessed the damage the current rules did to deals.

“It’s just a case of sitting down to do the damn work to get a new scheme in place. It won’t cost much,” he said.

In other measures targeted at small business owners and entrepreneurs, Mr Noonan extended the Start Your Own Business incentive scheme by two years until the end of 2018. He also extended tax credits for the self-employed.

He did not, however, address disparities in the universal social charge (USC) for higher-earning self-employed workers, another omission which will anger some entrepreneurs.

Mr Caulfield, who is also a director of The Irish Times Limited, said entrepreneurs and the start-up community needed to be more effective in their budget lobbying.

“Fishermen – who do a dangerous job – managed to get a €1,270 tax credit. I’m not saying they don’t deserve it, but why couldn’t entrepreneurs get more of what they were seeking?” he said.

“We don’t have a strong lobby and the industry needs to find a way of representing start-ups better. There is no easy answer to this.”