Brexit threat makes forming a government all the more urgent 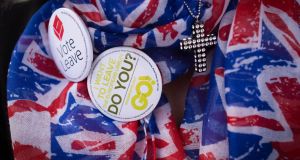 There are big questions for us if Britain leaves and there is a need for a government to be in place to communicate our intentions clearly, not only after a vote but in the run-up to it. Photograoh Stefan Rousseau/PA Wire

There has been a lot of talk since the general election of how a new government might be formed and how the different parties might best take advantage of the unprecedented political situation. But there is a risk now of this dragging on for a prolonged period, or even leading to the need for a new election.

In the meantime, while Enda Kenny and his Ministers remain in office, nobody is in power.

For a lot of reasons this cannot continue for too long, but the most pressing time pressure comes from the building Brexit debate and the looming vote. Quite simply, we need a government in office to deal with this.

Big businesses, for good reasons, rarely allow a leadership gap. When they do it tends to lead to a kind of stasis when day to day decisions are made, but anything bigger is put off for “the new boss”, whenever they arrive.

Politics is not business and the democratic process can take time. No great harm may result from a month of manoeuvering, if it does produce a result. But the fear is that we will not get a new government and will head into a new election, or that the new administration will be a shaky one, always looking over its shoulder.

There are obvious issues that a new government needs to address: housing, water charges, a huge investment deficit and the health service. These are big, difficult and complex topics that a government with a short-term focus simply won’t be able to address. They require, in some cases, quick action and a long-term plan.

A government is also needed to deal with the inevitable crises that can emerge. By their nature these hit out of the blue.

Other problems are more predictable.

Take the industrial relations situation. Luas may only be the start of it. The head of the Labour Relations Commission, Kieran Mulvey, has warned that the new government faces a “ticking time bomb” as the Haddington Road and Lansdowne Road agreements run out and the question of how public pay will be set in future needs to be faced. This is a central issue in the reform agenda for public services. Talk of our record economic growth rates is raising expectations.

But the real time pressure comes from the threat of Brexit. True, the vote is not until the end of June. But battle has already been joined and there is the risk of uncertainty in business and the markets in the run-up to the vote. This could affect everything from foreign direct investment, to exports to Britain, to our government bond market.

It would not, in this context, be a good idea to still be without a government by, say, the second half of April or early May , by which time the debate will be hot and heavy. A long period of political talking followed by a decision that another election is needed is thus potentially risky.

There are big questions for us if Britain leaves and there is a need for a government to be in place to communicate our intentions clearly, not only after a vote but in the run-up to it.

Britain may vote to stay in. It may turn out to be like the Y2K scare; a big fuss about nothing. But we just don’t know.

Let’s not fool ourselves that things can operate indefinitely with what is effectively a caretaker administration. Already St Patrick’s day travel plans are being cut, we are told that the Minister for Education will not go to the teachers’ conferences and that the government may miss its deadline for presenting its spring economic plan to Brussels.

Things can wander on for a few weeks. Senior and experienced public servants will ensure that nothing terribe happens. But sooner or later someone needs to be in place to make a decision.

1 Suspicions rife as key Brexit trade talks begin in Brussels
2 Bank leaked my loan request to family who tried to rip me off
3 Irish companies restrict travel over coronavirus fears
4 Life as a Facebook moderator: ‘People are awful. This is what my job has taught me’
5 We have little chance of building enough homes to meet election promises
6 Rolls-Royce surges on hopes of solution to Boeing 787 engine glitches
7 People who think they are useless make the best managers
8 Dublin 4 guesthouse offers rare opportunity at €4m
9 Wall Street hammered on coronavirus fears while Dublin dips 4%
10 Eason acquires rival Dubray Books for undisclosed sum
Real news has value SUBSCRIBE