Berlin in constant fear ECB will be lender of last resort 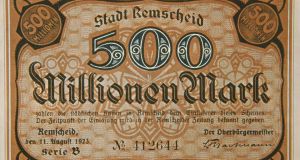 A 500 Mark note printed during the Weimar Republic.

The European Central Bank faces another moment of truth as its governors debate whether to buy up the sovereign bonds of euro zone countries to avert a deflationary spiral. At issue still is the attitude of the German faction in the bank, which is resolutely opposed to such moves. But what explains this stance?

The stock response is that German hypersensitivity over the use of central bank printing presses can be traced right back to the country’s painful encounter with hyperinflation in the 1920s, when the Weimar Republic printed more and more banknotes to finance expenditure.

Analysts insist there is more to the story than that, although the printing of money to finance expenditure (monetary financing) is anathema in Germany. Such concerns were at the heart of the independence granted to the Bundesbank when it was set up in 1957. The institution was a success. It was not for nothing that the ECB’s independence was enshrined in European law, together with a prohibition on monetary financing.

Whatever about that, it is clear that many of the ECB’s interventions since the outburst of crisis in 2007 have run into German resistance.

Axel Weber, the Bundesbank chief who was being lined up to succeed Trichet, left in protest at the ECB’s first forays into bond markets. The ranking German on the ECB executive board, Jürgen Stark, soon followed.

In 2012, Weber’s successor, Jens Weidmann, voted against the scheme in which the ECB pledged to buy bonds in unlimited quantities to keep a country in the euro. The promise brought the most acute phase of the debt emergency to a halt, a good thing. But the Bundesbank made a point of publicising its deep displeasure at the move.

Price stability is a concern here, yet there is more. In a 2012 paper for the European Council on Foreign Relations, analysts Sebastian Dullien and Ulrike Guérot traced elements of the wider German response to the debacle – including harsh fiscal retrenchment, punitive bailout terms, debt limits, etc – to the economic theory of “ordoliberalism” which was in vogue in the country from the late 1940s to the mid-1960s.

The theory, which opposes intervention into the normal course of the economy, rejects the use of expansionary fiscal and monetary policies to stabilise the business cycle in a recession.

“While ordoliberalism nowadays is no longer an important academic current in Germany, most economists have at some point in their career been influenced by ordoliberalist ideas,” wrote Dullien and Guérot. This, in turn, feeds into the “neo-classical” consensus among mainstream economists in Germany, and in particular attitudes towards economic policy co-ordination, external imbalances, budget consolidation and bailouts.

This is the case too for bond-buying by the ECB. Dullien and Guérot wrote of schemes to help euro zone weaklings but their observations are no less valid in relation to mooted purchases to avert deflation. The concern, in essence, is the ECB would slide down a slippery slope.

“Ultimately, bond purchases might lead to permanent financing of budget deficits through the central bank, with no instruments left to punish misbehaving governments. Such deficit financing could lead to inflation and an erosion of the monetary system.”

These are the kind of arguments which are swirling around right now. Hans-Werner Sinn of the Ifo economic institute claimed this week that deflation risk was “just a pretext for quantitative easing” to hammer out a bailout programme for the bedraggled southern fringe of the euro zone. Such an endeavour would recast the ECB as lender of last resort, the very thing that German economic puritans have feared since crisis struck.

1 Should my mam wait for house prices to drop before buying?
2 Cheers: Conor McGregor's whiskey races up the sales chart
3 Big majority uncomfortable returning to everyday activities
4 Why we’re about to learn if we are really in the A-team
5 US ‘hard seltzer’ drink White Claw launches in Ireland
6 Dublin drops out of top 50 in ranking of best cities for start-ups
7 ‘I’m so lucky to be in the Caribbean – a million miles from Derry Girls’
8 Citigroup warns that markets are out of step with reality
9 McCanns’ Balmoral sees property value hit from Covid-19
10 ‘I have a talent for justifying purchases’
Real news has value SUBSCRIBE