Bank of Ireland to fund 1,750 student bed spaces in Dublin and Cork 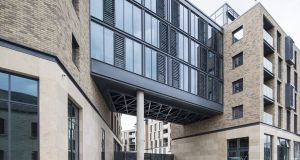 Bank of Ireland plans to fund €144 million worth of purpose-built student accommodation over next two years, with a particular focus on Dublin and Cork where demand is strongest.

The bank said it was currently funding 1,474 student bed spaces in the Republic, with a further 276 under consideration, and an additional 500 in Britain.

While the off-campus accommodation market in the UK is well established, the market here is still an emerging one.

Bank of Ireland met UK company Global Student Accommodation, one of the biggest players in the industry, back in 2014, and has since established a close working relationship.

It is part-funding the company’s construction of a 400-bed development at Mill Street, in Dublin 8.

“We’ve fostered long-standing relationships with partners such as Global Student Accommodation, which has expertise in developing and managing student accommodation across the world, and we’re currently supporting them on significant projects in Dublin and Cork,” Michael Murray, head of construction and development at Bank of Ireland corporate banking, said.

The bank is funding five high-profile schemes – three in Dublin and two in Cork – and a further Dublin project is in the pipeline. It also holds a number of completed projects in both cities on its books.

With only about 12,000 bed spaces available in Dublin – 6,800 on campus and 5,200 in the private sector – the market is significantly undersupplied. Only one in seven students attending third level in the capital currently has access to student accommodation.

In English cities, such as London and Manchester, the ratio is much lower, with one in three or one in four students having access to accommodation.

Bank of Ireland noted that Dublin had the lowest supply ratio in Ireland, accommodating just 13.2 per cent of its students. However, 4,600 private beds currently either have planning or are in the planning process in the capital, with around 2,300 of these estimated for delivery by 2019.

Even if all the pipeline schemes are developed, only 18 per cent of full-time Dublin students will have access to purpose-built student accommodation, a figure that remains relatively low compared to major student cities, the bank said.

In Cork, it is estimated that approximately 10,000 students of the total of 25,000 require accommodation annually. There are currently only 3,700 student beds in the city.