Anglo and ‘equally reckless’ Irish Nationwide should never have been included 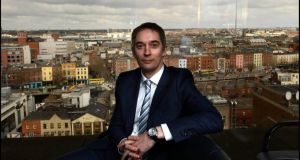 The credibility of the European project is at stake in the push to end bank bailouts by taxpayers, a ranking Central Bank official has said.

Lars Frisell, adviser to outgoing governor Patrick Honohan, told an audience in Stockholm that the blanket bank guarantee of 2008 will go down in Irish history as a “very costly mistake”.

One of the most important lessons to be learned from the settlement of the banking crash in Ireland was the need to execute new European rules which require the bail-in of bank capital and liabilities before any official funds are used.

In a speech, Mr Frisell said such measures were required to break “Europe’s deplorable tradition” of bailing out banks and bankers at the expense of taxpayers. “The credibility of European politicians, and the European project, depends on it.”

While he recognised other potential measures including a more limited guarantee would also have resulted in substantial costs, he said the then government “took a gamble” that loan losses would be limited when it decided to protect all creditors from losses.

With hindsight, Anglo Irish Bank and the “equally reckless” Irish Nationwide Building Society should never have been included in the blanket guarantee. “Whatever the short-term benefits of a general guarantee, the costs in terms of credit losses arguably outweigh them,” he said.

“There were several voices arguing against including Anglo in the general guarantee at the time. Exactly who sided with which alternative is still a contentious issue. However, with the very imperfect information the government had to hand one can appreciate both arguments.

“As in many countries after Lehman Brothers, the task of restoring trust in their banking market was urgent and a more conservative guarantee, perhaps covering only new debt issuance, only depositors, or indeed excluding certain banks, might have failed to do the job.”

Mr Frisell, a Swede, said Dublin “unfortunately” may have been inspired by the successful blanket guarantees enacted in Sweden and Finland in the 1990s.

In retrospect, the optimal solution was an insolvency law to put Anglo into State conservatorship, followed by some degree of depositor preference to facilitate a balance sheet division into an entity for wind-down and a viable bank.

“Except for the covered deposits most of the liabilities would have stayed with the old bank, alongside a large chunk of the real estate portfolio. Then a wide-ranging guarantee would have been issued for the remaining banks, thus drawing a clear line between the bygone entity and going-concern banks.

“Still, the burning of bondholders would likely have jolted investors and necessitated significant emergency liquidity assistance from the Central Bank, which soon proved necessary in any case.”

Mr Frisell acknowledged that taking control of a formally solvent bank was not a decision to be taken lightly. “But it can be and has been done – it resembles closely the measures Iceland undertook in the early phase of its crisis.”

This would have been the right thing to do even though the European Central Bank considered any bank failures at that time a very bad idea.

He noted that the public rescue of the Swedish banking system at that time cost 64 billion crowns, some €12 billion in today’s money.

“For Swedes – and probably most others too – it is hard to fathom that Ireland, with a population just about half of Sweden’s, has injected €64 billion into its banks. This means that almost exactly ten times as much money has been spent per Irish person as per Swede.”

Although the Swedish state recouped all its money by 2013, Ireland would not be so lucky. “Suppose half of the bailout money can be recouped. That would still imply a cost of some €7,500 per Irish man, woman and child.”