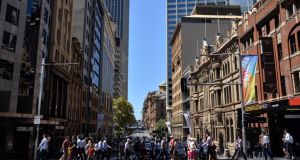 Downtown Sydney: while the IMF is concerned the housing market in Australia is overheating, experts point to the ‘natural rise in capital city property’. Photograph: Saeed Khan/AFP/Getty Images

Australia’s unemployment level is at a 12-year high (though at 6.4 per cent it’s still far lower than in most developed countries), its interest rate has been slashed to a historic low of 2.25 per cent, $56 billion (€39 billion) of forecast government revenue has failed to materialise, and last year’s budget still has not passed the senate, 10 months on.

Also, the prices of iron ore and coal, two of Australia’s major exports, are in a slump, the government is wracked with internecine disputes that almost removed the prime minister last month, and the International Monetary Fund is concerned the housing market is overheating.

“Australian investors have always gone for blue chips or red bricks; resource stocks and property,” he told The Irish Times.

“Because of the natural limits on the housing market in Australia, we are always going to have a bit of a roaring market, particularly in Sydney. Every decade people say ‘You’re not paying that for that are you?’, but when they look back they think they got a bargain. There’s just a natural rise in capital city property.”

Australia’s previous Labor government saw prime minister Kevin Rudd replaced by Julia Gillard in an internal coup. Three years later, Rudd challenged Gillard and was back in power briefly before losing in a landslide to the Liberal-National coalition. The coalition used to call this period the “Rudd-Gillard-Rudd years”, using a tone familiar to anyone who has ever heard a unionist politician refer to “Sinn Féin-IRA”.

But that hubris has deserted the coalition after prime minister Tony Abbott came close to losing power to an empty seat last month. Though nobody had the guts to put their hand up to run against him, a Liberal party-room vote still saw 39 out of 100 MPs and senators vote against Abbott.

Having narrowly survived, Abbott told parliament that “good government starts today”. Labor, not unreasonably, asked what on earth he had been up to before that.

Despite almost 40 per cent of his colleagues wanting anyone but him as prime minister, Abbott said there would be no recriminations. Three days later he fired his chief whip for failing to keep him informed about the depth of ill feeling on the backbenches.

One of the most contentious aspects of last year’s federal budget was a plan to charge people to see a GP (82 per cent of such visits are currently not charged for). In the 10 months between saying it was necessary because there was a “budget emergency”, to last week saying the plan was “dead, buried, cremated”, the government has had more positions than the Kama Sutra on it.

First they called it a “medical co-payment”, then rebranded it as a “price signal”, and then re-rebranded as a “value signal”. The cost of the signal depended on which minister was talking and what day of the week it was. Labor called it a “GP tax” throughout.

Treasurer Joe Hockey says the climbdown will cost the budget $250 million a year. His government endured a lot of political pain for what would not have been a huge financial gain.

In the past two opinion polls, however, the government has narrowed the gap on Labor’s lead from 57-43 after preferences, to 51-49. Part of the reason is Labor was being pilloried in the press for coasting on Abbott’s unpopularity rather than having any policies for dealing with the budget deficit.

Labor took notice and launched its “Stopping multinational tax avoidance” policy. “In 2012-13 companies shifted over $300 billion between their Australian arms to overseas parent or subsidiary companies,” it says. “Our priority will be to shut down loopholes that allow big multinationals to send these profits overseas.”

Harcourt says a lot of the problems the coalition government is experiencing are down to its failure to sell its message. “The economic management in Australia is very lacking at the moment. For a start they over-egged the debt and deficit problem. Debt is 11 per cent of GDP; compared to a lot of the world it’s not an issue.

“What they really should have said is that we’re in good shape and that we’ve got a good fiscal position, but over time demographics and other factors will create certain demand for services in an ageing population, here are some proposals to ensure we are in good shape fiscally. But instead they said we had a debt crisis and panicked everyone and they couldn’t get their budget through as a result. That is not how you frame an economic strategy. Sound economic management is not about flying kites,” he said.

“There’s a readjustment, because we had very high commodity prices and very strong terms of trade that were [boosting] the economy very successfully,” said Harcourt. “But we’ve come off the historical highs, which in some ways was to be expected. When I travel around Asia we seem to be moving from a mining boom to a dining boom. The agricultural industries are going quite well.

“Ultimately, when you think of the urbanisation of China, India and the middle class demand for beef from Asean [Association of Southeast Asian Nations], the things that Australia produces will fuel the growth in Asia, and that’s why the long term fundamentals are still going to be good for Australia,” he said.

Despite the government’s inability to get its budget passed, and with another budget due in two months, Australia is in its 24th year of continuous economic growth, and Hockey says he intends to be treasurer for the long haul. “I have never been a quitter. And I’m not going to quit when it comes to the best interests of the nation,” he said.