Embassies in Thailand, Indonesia and general consulate in Hong Kong should give trade a boost 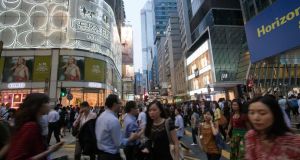 Hong Kong: Ireland is to open a Consulate General in the city which will come as welcome news to those trying to promote Ireland in this fast-growing region. photograph: jerome favre/bloomberg

At the launching, the Tánaiste said the embassy network was being specifically designed to support trade and inward investment.

Crucially with this in mind, Asia is strongly represented in the new missions – embassies will be established for the first time in Bangkok and in the Indonesian capital, Jakarta. There will also be a Consulate General in Hong Kong.

This will come as welcome news indeed to those trying to promote Ireland in these fast growing areas.

Ireland is currently represented by an honorary consul in Hong Kong, for example: by making it a full Consulate General, it will provide a big boost to the substantial Ireland community there – most of the Irish in Greater China live in Hong Kong.

Indonesia is a country that has a lot to offer Ireland as a trading destination, particularly for exporting food.

And the absence of Bangkok from our roster of diplomatic missions has always been puzzling – from a consular point of view because of the large number of Irish tourists who go there, but also because it is one of the most dynamic of the south-east Asian economies and Ireland could stand to benefit from having an embassy there.

Of course, Thailand is a challenging environment at the moment. It has experienced unrest on many occasions in the past few years, but the economy has weathered it well.

The current round of protests, which have been going on for three months and are led by an opposition who want to oust caretaker prime minister Yingluck Shinawatra and make sure her brother, exiled premier Thaksin Shinawatra, doesn’t make a comeback, have really had an impact on the economy.

Imports fell 15.5 per cent in January from a year earlier, the biggest decline since October 2009, while exports dropped two per cent.

Tourism accounts for about a tenth of Thailand’s gross domestic product.