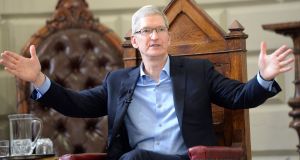 Tim Cook has said Apple – which has already paid $800 million (€718.6 million) in taxes on European profits routed through Ireland in 2014 – has set aside “several billion dollars” to meet a US liability as earnings are repatriated.

Speaking in an interview with RTÉ, Apple’s chief executive said he expected the “repatriation to occur next year”.

Ireland was ordered by the European Commission on Tuesday to recoup €13 billion of unpaid taxes from Apple, from 2003 and 2014, as Brussels’ competition arm found the technology group received unfair tax advantages that amounted to State aid.

The EU said Apple’s main Irish entity, which is responsible for selling its products in Europe, paid an effective tax rate of 0.005 per cent on earnings in 2014. The ruling suggested this equated to €10 million.

However, Apple told its investors on Wednesday in a question and answers document that its Irish entities paid $400 million of tax in 2014 in Ireland and a further $400 million of “current US taxes on those profits, bringing total current taxes paid to $800 million”.

Mr Cook signalled in the RTÉ interview that the ultimate tax bill on the earnings will run into “several billion dollars” as the 2014 earnings are moved to the US, likely to be next year.

The Apple chief executive insisted the group never received a “sweetheart” deal from the Revenue Commissioners, even though the EU said that so-called tax rulings by the Irish authorities in 1991 and 2007 amounted to such.

Mr Cook said the EU’s findings are “maddening to hear”.

“It’s clear that it is coming from a political place. No fact or law. It’s an unfortunate thing that we have to work through,” Mr Cook said. “When you are accused of doing something that’s so foreign to your values, it brings out an outrage in you, that’s how we feel.”

He said the 26.1 per cent tax rate the group paid world wide “is a reasonable level”.

“The finding is wrong headed, it’s not true, there wasn’t a special deal between Ireland and Apple, it didn’t exist. We went into Ireland in 1980, we didn’t go there to seek advantages on taxes, we had only 60 employees, very little revenue. Through those 37 years together we’ve done some exciting things, we now have 6,000 people, we’ve grown the employee population by a hundred times.

“That was only possible because of the Irish people, both welcoming us to the community and growing with us. We’ve had good times and some challenging times, when I first came to the company in 1998 Steve had just come back, we were on the verge of bankruptcy, probably within weeks of it. We have to hunker down. I remember going to Ireland very shortly after joining the company, we sort of felt we had to close the site (I didn’t tell people at the time), got there and really started understanding what we had there.

“The people is what I’m talking about, not land and buildings and equipment, we came out of there with a plan to pare back, we got down to less than a thousand people, we diversified the site, we were just doing manufacturing.”

Mr Cook said the company have “ long been an advocate for a simple, straight-forward and transparent international tax system. We desire this, we would work with any one to achieve this. It’s very easy to see what our tax rate is. What our tax payments are, we disclose them worldwide. However, the tax system itself is so complex, this is not a system that we think is good. The bulk of people, even those who wrote it, don’t think it is good.

“We’re very committed to Ireland, have been for 37 years. We have a long-term romance together, I’m pretty confident the government will do the right thing. And I think the right thing here is to stand up and fight against this over-reach.

“Clearly the sovereignty of the country is at stake. The rule of law and the certainty of law is at stake. When those large values and principles are at stake we all have to stand up and fight for what’s right.

“I’m confident that the government will do the right thing, that they will appeal. We’re going to appeal too, I think both parties feel that the decision is wrong, that it’s not based on law or facts, that it’s based on politics. It’s important that we stand up and saw that very loudly.

When asked if he feared the Irish Government would take the money and run, he said he knew “Ireland always does the right thing. You can always count on that. Democracy can be a bit ugly in the process, but it eventually gets to the right place.”

1 Ryanair and Eir the worst for customer service during Covid crisis
2 What to consider if older person or loved one needs care at home
3 Fair deal? Family at odds with hospital and each other not so sure
4 ‘Essential’ retailers risk a firestorm if they exploit the closure of the ‘non-essential’
5 Glenveagh attracts growing hedge-fund interest
6 INM inspectors write to former directors in ‘inside information’ inquiry
7 Level 5 restrictions risk pushing economy into double-dip recession
8 Tinnitus group Neuromod raises €10.5m for expansion
9 Streaming services set for Christmas battle after drama-filled year
10 PlanNet21 eyes further acquisitions after buying rival eCom
Real news has value SUBSCRIBE