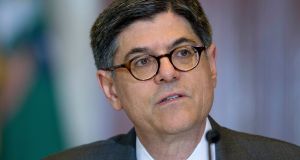 US treasury secretary Jack Lew has been asked to consider using a provision allowing a “double rate of tax” to be imposed on any country engaging in discriminatory taxation. Photograph: Andrew Harrer/Bloomberg

The Obama administration is coming under political pressure to take direct action against European companies over an EU tax inquiry into Apple’s arrangements in Ireland.

Amid growing tensions on the matter between Washington and Brussels, a powerful Senate committee has urged US treasury secretary Jack Lew to consider tax penalties against European companies if the EU Commission directs Apple to pay back-taxes in Ireland.

Apple’s affairs in Ireland have been under investigation in Brussels since mid-2014. A decision in the case was delayed in November, but there was a surprise development yesterday when the firm’s chief executive, Tim Cook, had “private” talks with EU competition commissioner Margrethe Vestager.

Ms Vestager’s spokesman confirmed the meeting took place, but he would not comment on speculation that a settlement of the case may be in play. Apple did not respond to queries.

JP Morgan, Apple’s investment banker, has said the firm could be on the hook for $19 billion (€17.5 billion) in a worst-case scenario. The Apple case is the biggest in a commission investigation which also inquired into the affairs in other countries of US groups Amazon, Starbucks and McDonald’s, and Fiat of Italy.

In recent days, the Senate finance committee has urged Mr Lew to warn Brussels that Washington views the prospect of retroactive tax claims from the companies concerned as a “direct threat” to US interests.

The committee also asked Mr Lew to consider using a provision allowing a “double rate of tax” to be imposed on any country engaging in discriminatory taxation.

Last month Apple agreed to pay €318 million to settle an Italian tax claim over profits declared in an Irish subsidiary.

The commission is examining whether Apple received “selective” advantage from the Revenue in Ireland.The Government has vowed to appeal any adverse finding in the European courts.