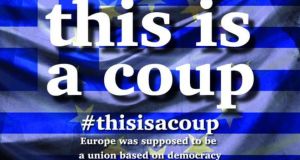 The hashtag appeared to originate on Sunday evening from Sandro Maccarrone, who describes himself as a physics teacher from Barcelona. He tweeted: “The Eurogroup proposal is a covert coup d’etat against the Greek people. #ThisIsACoup.”

A list of demands handed to the Greek government in order to secure a European bailout inspired a social media backlash against Germany and its hawkish finance minister, Wolfgang Schaeuble.

#ThisIsACoup was the second top trending hashtag on Twitter worldwide - and top in Germany and Greece - as euro zone leaders argued through the night to convince Greek prime minister Alexis Tsipras to take the deal or face bankruptcy and his country’s expulsion from the EU’s common currency area.

The tag was attached to tens of thousands of angry comments denouncing German-inspired proposals for EU-directed reforms of Greece’s public administration and demands that Athens pass new laws within days to raise taxes and cut back on pensions.

It was given impetus when Paul Krugman, the Nobel laureate economist, praised it on his New York Times blog: “The trending hashtag ThisIsACoup is exactly right,” he wrote. “This goes beyond harsh into pure vindictiveness, complete destruction of national sovereignty, and no hope of relief.

“It is, presumably, meant to be an offer Greece can’t accept; but even so, it’s a grotesque betrayal of everything the European project was supposed to stand for.”

Among other elements of the EU proposals that outraged some commentators was a suggestion that some €50 billion euros of Greek public assets be placed in an independent trust based in Luxembourg, out of reach of Greek politicians, the proceeds of which from privatisations would go directly to pay off debts.

The hashtag appeared to originate on Sunday evening from Sandro Maccarrone, who describes himself as a physics teacher from Barcelona. He tweeted: “The Eurogroup proposal is a covert coup d’etat against the Greek people. #ThisIsACoup.”

“I can’t support a Europe that acts as a thuggy bailiff against Greece #Thisisacoup,” tweeted Suzanne Moore, a columnist for the Guardian newspaper.

Barbara Lochbihler, a member of the European Parliament for Germany’s Greens party, tweeted: “They talk about trust. Only to draft a proposal that is pure humiliation. Brilliant idea. #ThisIsACoup.”

Pictures tweeted with the hashtag included MrSchaeuble branded with a swastika and the blue European flag with its circle of gold stars rearranged into the same Nazi symbol. Common, too, were images from Germany’s World War Two occupation of Greece.