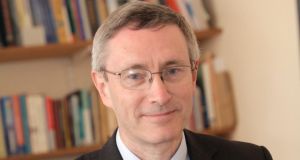 A budget adjustment of just €800 million would be enough to hit next year’s deficit target of 3 per cent, the Nevin Economic Research Institute has said.

In its latest quarterly outlook, the trade union-backed think tank said improving economic conditions would enable the Government to implement budgetary cuts of less than the previously-predicted €2 billion.

This contradicts the independent Fiscal Advisory Council, as well as the IMF and the European Commission, all of which have urged the Government to stick to the €2 billion target.

The institute warned that another tough budgetary consolidation risked depressing domestic demand even further, which would delay economic recovery.

In its report, the institute predicted the economy would grow by 2.1 per cent this year and 2.9 per cent in 2015, which is broadly in line with the Department of Finance’s own predictions.

The institute predicted unemployment would fall from its current rate of 12 per cent to 11.5 per cent this year and to 10.7 per cent in 2015.

While the State’s public finances remain fragile, it said a “do nothing” stance in the upcoming budget would be insufficient to restore the public finances to a sustainable path.

This would be enough reduce the budget deficit to 2.5 per cent of gross domestic product next year, comfortably inside the troika-agreed target of 3 per cent.

The institute also called for a modest increase in social spending as part of a social emergency fund targeted at the most vulnerable individuals, with part of the fund reserved for spending on social housing.

Noting public spending was already low by EU standards, it called for accompanying “off-book” investments that restore public investment to the EU average in 2015.

“There is no room for tax cuts in Budget 2015 without causing further harm to public services or the goal of reducing the deficit. Ireland is still running a substantial deficit in its public finances and is carrying a high level of outstanding debt,” the report’s lead author Dr Tom McDonnell said.

“Budget 2015 should focus on public investment, reform of tax expenditures and measures to redistribute excessive returns on capital,” he added.

Neri director Dr Tom Healy also the institute’s research showed that there is a strong case for increasing the overall level of public capital investment to help address demographic pressures and the current crisis in social housing.

1 Nine more suing INM and Leslie Buckley over alleged data hacking
2 Columbia Sportswear defies gloom with first Irish standalone shop
3 EY prepares for backlash over Wirecard scandal
4 How to further divide the economy using the wage subsidy
5 Restaurants file court actions against insurers over lockdown losses
6 Why are markets booming when a crash is on the way?
7 Income tax receipts prove remarkably resilient to coronavirus
8 Could your old car be giving away all your secrets to its new owner?
9 ‘The rental situation stops me moving back home’
10 Brexit: System agreed for Irish goods to skip checks on UK trade
Real news has value SUBSCRIBE