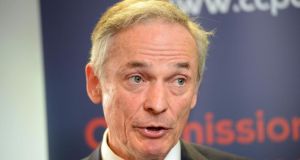 Minister for Jobs Richard Bruton: “As a small open economy, Ireland’s ability to grow and create jobs is directly linked to our ability to sell our goods and services overseas”. Photograph: Eric Luke

A contentious EU trade deal with the US could deliver as many as 10,000 new Irish jobs in the export sector and a permanent 1.1 per cent expansion in the size of the domestic economy, new research suggests.

Amid public resistance to the trade talks in Germany and France and a perceived decline in American interest, Government-commissioned research finds that Ireland stands to realise double the average benefit in the EU.

The examination of the Transatlantic Trade and Investment Partnership (TTIP) was carried out by Copenhagen Economics for Minister for Jobs Richard Bruton. The 80-page study, to be published today, finds that Ireland’s export sector would receive a significant boost between three and five years after an agreement comes into force to tackle tariff and non-tariff barriers.

Among other findings, the report suggests an eventual deal could deliver a €2 billion or 1.1 per cent increase in Ireland’s gross domestic product.

Real Irish national income – measuring actual purchasing power available for final consumption – would increase by €2.4 billion or some 1.5 per cent, the report suggests.

The forecast advance in Ireland’s GDP, predicated on heavy Irish exports to the US, follows studies by the European Commission which suggest that the average gain around the EU would be of the order of 0.5 per cent of national economic output.

“As a small open economy, Ireland’s ability to grow and create jobs is directly linked to our ability to sell our goods and services overseas,” Mr Bruton said, ahead of talks in Dublin today with EU trade commissioner Cecilia Malmström.

“That is why the TTIP is so important to Europe, but Ireland in particular – because it will allow Ireland grow its trade with the US and grow jobs back at home.”

The Copenhagen study concludes that a deal could help to increase real Irish wages by 1.5 per cent across all skill groups, with wages in low-skill groups rising 1.9 per cent. Exports would rise 3.8 per cent, investment in Ireland would grow by 1.5 per cent and trade would also rise outside the EU-US network.

The potential loss of output from the beef sector was estimated at €25 million-€50 million. In Government circles, however, this is cast in contrast to the potential net gain of between €230 million and €270 million in other agricultural output.

The risk to Irish beef exports is assessed separately to recent agreements to resume exports to the US and Chinese markets. “As US beef is produced at lower costs than EU-produced beef, the largest impact of the TTIP is likely to arise from a lowering of trade barriers on the EU market,” said the Copenhagen report.

However, the paper said substantial reductions in tariff barriers generally will increase trade in both directions.