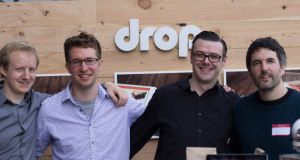 The oldest surviving cookbook in the world, thought to be written in the early fifth century by a Roman named Apicius, has a distinct leaning towards the use of asparagus in almost everything.

Aside from adding in pictures and moving ambitions beyond asparagus casserole, cookbooks haven’t really changed since then.

Even the introduction of the internet has for the most part simply transplanted content from page to PC or smartphone screen.

Drop chief executive and co-founder Ben Harris says he and his company co-founders began looking into the idea of revolutionising the recipe itself through products to create a “connected kitchen”.

Harris – an award-winning industrial designer by trade – says that when he and co-founders Jack Phelan, Jonny McCauley and Tim Redfern began to bounce around ideas for a company in November 2012, they realised that “the kitchen was really ripe for innovation”.

“It’s been completely overlooked. So that’s why we decided to develop a connected recipe platform, and then we’ve got a pipeline of products that feed into it.”

Drop is a physical product – an iPad-connected kitchen scale shaped like a drop – and the recipe platform Harris mentions. Where it really gets clever is in the many ways you can interact with it while you cook.

The company has offices in Dublin’s IFSC and the Mission district of San Francisco. The four founders – a mix of “designers and technologists” – have recruited chefs and created an industrial kitchen with a “curated recipe list” full of cakes, breads and pretty much anything else you can bake.

To use Drop, just choose a recipe and place a mixing bowl on top of the scale. Then begin to add the ingredients, with your iPad – connected automatically via Bluetooth – displaying Drop’s hugely responsive user interface, which has a “visual target” on screen for each ingredient.

Bakers will see exact details of how much caster sugar and double cream, for example, is needed, with the Drop scale detecting when enough has been added and moving automatically to the next step.

You can do the same if you don’t have enough flour, chocolate, rhubarb or whatever else you’re cooking with. If you’re missing an ingredient, the recipe platform will suggest alternatives based on the professional knowledge of Drop’s chefs.

If you have any particular dietary requirements, or if you’re cooking for three people rather than the six people for which the recipe was designed, it will scale instantly too.

All of this can be done without “having to touch the iPad with flour-covered hands”, says Harris, as the scale itself can be used to guide you through the recipe.

You can add ingredients you’re missing to a shopping list, which syncs with your smartphone.

And once you pop a cake or bread in the oven, a timer syncs with your phone, “so you don’t have to carry the iPad around the house to keep an eye on what you’re cooking”.

“Because we know exactly where you are in the recipe we can tell you exactly what the recipe should look like at each stage too,” says Harris, with images and videos to help aspiring cooks learn how to mix, knead and carry out all manner of cooking chores.

Enterprise Ireland backed the four founders with a feasibility grant in 2012, before Drop attracted the attention of Liam Casey, founder of product development heavyweight PCH International, who said he would give them “20 minutes of his time”.

He ended up spending two hours with them and promising them a place on his four-month hardware start-up accelerator programme, Highway1, in San Francisco.

As part of Highway1, Casey brought the group to Shenzhen. Full production on the connected scale has since begun in the Chinese manufacturing hub, with preorders being taken on the company website.

Initial pricing of about €72 has brought in customers from “Sweden, Kenya, Japan, the Netherlands, Chile, loads from America and a good few from Ireland”, and the first products will be delivered this autumn.

Android and Windows versions will follow, while the group believe the scale is just the beginning of a brand that will “move the whole way around the kitchen”.

“We’re starting with Drop,” says Harris, “but we want to give people the confidence that every time they go into the kitchen they’re going to be leaving with food they’re incredibly proud to share.”