Drilling down into geothermal heating 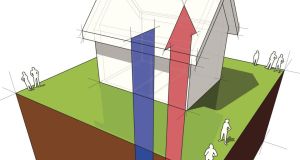 We may not be Iceland or Sicily. We have no active volcanoes or regular seismic activity. But that does not mean we cannot exploit the geothermal possibilities that lie beneath us to generate power and heat.

Geothermal relates to taking heat naturally in the ground and using it either for direct thermal heating locally or going through a heat exchange to generate electricity.

“When people think of geothermal they tend to think of high-enthalpy [high thermodynamic potential] sources,” explains Prof Alan Jones from the school of cosmic physics geophysics section at the Dublin Institute of Advanced Studies. “You think of places like Italy, Iceland and Indonesia, where there are a lot of volcanoes.

“But in fact only 5 per cent of the world’s population live anywhere near high-enthalpy sources. So a lot of the thrust of current geothermal energy exploration has been in low- enthalpy sources.”

Still, even in low-enthalpy regions such as Ireland the deeper you go into the ground the warmer it gets. Generally, for every kilometre you go down you’ll get a 25-degree increase in heat.

Deep drilling With the new type of heat exchangers you can

“So you only need to drill a hole 3km down and potentially you have a resource to tap for making electricity.”

Geothermal energy can be harnessed from both shallow and deep drilling. Shallow drilling is ideal for heat generation.

It was first harnessed in Tuscany, Italy in 1904. There were some earlier plants in the 1890s developed in Idaho, but Italy is now one of the world’s leaders, with more than 840mw of installed electrical capacity.

There are more recent success stories. The Paris basin has been used to generate heating – which has been distributed around housing blocks in the city – for only a few decades.

“Paris began production in 1969 and its basin now has 39 active well doublets – both producing and injector wells,” says Riccardo Pasquali, senior geologist at GT Energy. “Quite a successful geothermal industry has developed there.

“Another good example would be around the Molasse basin in Germany, around Bavaria,” he adds. “There are over 25 plants in operation in Bavaria alone. This industry only started in 2001, driven by a rise in gas prices.” Ten years on they have doubled their output and the value of the industry for Germany now stands at about €1 billion.

GT Energy, with which Pasquali works, is one of a small number of companies in Ireland looking at deep and shallow geothermal exploration. Even though it has been found that Ireland has lot of shallow geothermal drilling potential, the will does not appear to be there to pursue it.

“GT Energy are the only exploration company really trying to promote geothermal energy in Ireland,” says Jones. “They have a test well out in Newcastle, outside Dublin, and have found very favourable conditions: heat flow gradients of around 32 degrees centigrade per one kilometre.

“Things have been looking very good, with an increasing number of investors getting involved. The biggest problem, however, is that the Irish Government is very slow to bring in legislation to cover geothermal energy.

“At the moment it offers no protection for GT Energy. The Fine Gael manifesto included a provision to develop a pilot geothermal energy project, but they’ve done nothing. So GT have stopped investing too much of their resources in Ireland, and moved over to Manchester.”

According to Pasquali, the lack of will to generate heat from shallow ground-source geothermal energy in Ireland represents a massive wasted opportunity.

“It hasn’t been researched extensively but it is clear that these 70-90 degree centigrade-type reservoirs occur across Ireland and are perfect for the purposes of district heating. We’re never going to have numerous deep geothermal plants on the island but we could have a number of small plants that could easily adapt to the existing grid.

“However, we lack a really strong policy with respect to looking at any other renewable energy technologies other than wind. Marine and tidal are barely looked at either. The elephant in the room for me is the absence of a dedicated strategy to address our heat sector.”

In the shallow geothermal sector, there was something of a mini boom in the installation of ground source heat pumps between 2006 and 2008, which was on the back of support measures from the Sustainable Energy Authority of Ireland.

One such beneficiary of that grant system is 78-year-old Seán Sheehy, who built a new home in Baldoyle, Dublin, five years ago with its own private geothermal system. “A company called Ashgrove Renewables installed it for me,” he says. “It was initially a fairly messy process but it has worked out great.

“They wanted to drill a hole 115m down. But they ran into some shale about 90m down when they were looking for rock. So instead they drilled two 90m holes.”

“I’ve been told payback from using this type of renewable would be about nine years after installation,” he says.

“I’m very happy with it. I have underfloor heating on both the ground and first floors and, given it was installed as part of a new house, it didn’t create anymore inconvenience than it might do if you were doing a retrofit.”