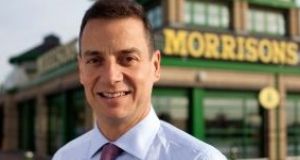 Dalton Philips, the former chief executive of Morrisons, has joined the board of the Government-backed Social Innovation Fund as a director.

Mr Philips is a senior advisor with the Boston Consulting Group and was recently announced as a non-executive director of One51.

Originally from Wicklow, the retail executive holds a BA (Hons) from University College Dublin, an MBA from Harvard Business School and an Honorary Doctorate of Management from Bradford University.

Other board members of the fund include John Higgins, Caitriona Fottrell, Gareth Morgan, Shane Deasy and Rosheen McGuckian.

The organisation, which was established earlier this year, is looking to raise matching funding of €5 million from private philanthropy in order to create a growth capital fund of at least €10 million for social innovations.