Surveyors report a decline in infrastructure workloads in North 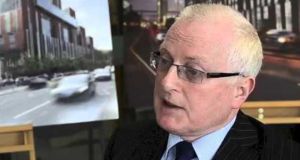 Prof Alastair Adair, Ulster University acting vice-chancellor, said the new campus will act as an important social and economic regenerator for the area

The Ulster University has awarded a £150 million contract to develop phase two of its Belfast campus to a joint venture between Lagan Construction and Portuguese firm Somague Group.

Construction of the university’s new £250 million, 75,000 square metre campus kicked off last year and it is expected to be completed by 2018.

The campus is currently the largest building project in Northern Ireland and will support more than 5,000 construction jobs during the project build and fit out period.

Prof Alastair Adair, Ulster University acting vice-chancellor, said the new campus will act as an important social and economic regenerator for the area.

“At a crucial time for Ulster University and for the Higher Education sector, today’s announcement brings us a step closer to realising our plans to deliver a modern, first class teaching and learning environment which the people of Northern Ireland deserve and can be truly proud of.

“By 2018, over 15,000 students and staff will bring the new campus to life, bringing much needed regeneration to this area of the city,” Prof Adair said.

The construction boost for the city comes as new report this week shows that although the sector enjoyed an increase in activity over the first quarter of the year there has been a substantial drop in the level of public sector work being done.

The latest Royal Institute Chartered Surveyors and Tughans Construction Market Survey highlighted that the North was the only region of the UK where surveyors reported a decline in infrastructure workloads including the building of public facilities like schools, hospitals and roads.

They blamed public spending cuts as the key reason.

“We understand that public money is finite and becoming more scarce. But we would encourage the politicians to recognise the paramount importance of investing in infrastructure and to prioritise funding capital expenditure where possible.” Mr Collins said.

But at least one local firm is celebrating a new contract win.

Colin Loughran, chief executive of Lagan Construction Group said they were delighted to have won the project and “to have forged a partnership with one of Europe’s largest construction companies, Somague”.

“This is a landmark build in a key part of the city and one which will shape both the community and the construction sector for years to come.”

The Portugese group said it is also looking forward to its first venture with a Northern Ireland company.

Rui Vieira de Sá, president, Somague said: “We believe that this joint venture can deliver significant benefits to both Ulster University and the wider construction sector. We look forward to commencing what is an exciting large scale project for the people of Northern Ireland.”